Bhuvan Bam, CarryMinati, Ashish Chanchlani are famous YouTubers and have been killing it on YouTube with their remarkable content. They have wowed us with their unique content on a regular basis. Today, they have outperformed a large number of subscribers and adherents on their YouTube accounts. But to conclude, who is the ruler, could be a real question, isn’t it? So, before you get to decide on it, here are the briefs.

Ajey Nagar has a YouTube channel called CarryMinati. An energetic gamer, he is known for his comedic dramas and responses to different other social media stars on his channel CarryMinati, which has increased more than 26 million supporters. Be that as it may, he cherishes his work and is exceptionally energetic about it!

Ashish Chanchlani shot to acclaim with his comic vines on Facebook, Instagram and YouTube. What makes him distinctive is that no two videos from his channel are the equivalent, which implies that he reliably makes unique and exceptional content.

Bhuvan Bam otherwise known as BB Ki Vines goes to the top with regards to Indian YouTubers. Bhuvan has a terrific comical inclination, he has acquired a huge number of years inside 5 years. 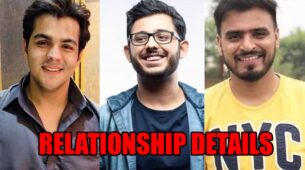