The world was taken by storm when Indian cricketer Yuvraj Singh discovered he had cancer but it was his determination that pulled him through and how! As we all know, Yuvraj Singh is one of the most seasoned and heavy hitters of the Indian cricket team. His amazing performance in the 2011 world cup contributed to India’s victory but right after the world cup, he was diagnosed with seminoma lung cancer. In that cut-throat world of fame, game and name, it seemed like cricketer Yuvraj Singh was stumped out at the peak of his game! Yuvraj Singh had been experiencing symptoms before the game but he decided to ignore all of that to focus on his game; such was his dedication to the sport.

He was scared as lung cancer has a very low survival rate and also due to the side effects associated with chemotherapy. This caused him to reconsider undergoing chemotherapy but he soon understood that he needed to undergo treatment if he were to play again. “Cancer. It’s like a death sentence. You become really unsure where your life will take you.”
Yuvraj Singh’s reaction to cancer was all too human but his actions were the ones that pulled him out of this deadly disease.

Post chemotherapy, Yuvraj returned to play the India vs Afghanistan World T20 match in September 2012 and his triple strike plucked the life out of the Afghan challenge! This is why he is a world famous cricketer, not just for his impeccable skills but also for his girth and determination to fight cancer. Indian cricketer Yuvraj Singh is well-known in the world of cricket for his fame and game but his biggest takeaway has been fighting this deadly disease and making his ultimate comeback in cricket. This young Indian cricketer became an inspiration to millions of people world over, and we couldn’t agree more! 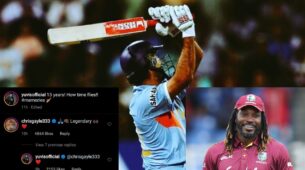