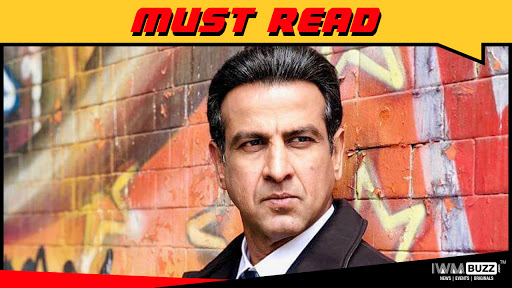 Ronit Bose Roy happens to be the ideal blend of raw handsomeness blended with an intensity that sets fire on-screen every time he appears. It is no hidden secret that such a personality is bound to have a massive fan following, courtesy all the charm and the powerful characters that he plays. K.D. Pathak in Adaalat and Rishabh Bajaj in Kasautii Zindagii Kay are some of his most popular roles on the Television screen. He’s played the bad guy in movies like ‘Kaabil’ and now he’s all set to play the bad guy again in ZEE5’s upcoming, Line Of Descent. In an exclusive chit-chat with IWMBuzz, Ronit Bose Roy reveals it all about the characters he enjoys, his preparation for Line Of Descent, his favorite genre of movies and a lot more. Read to find out –

You are someone who’s primarily been into the other side of things as a ‘cop’ in crime dramas and ‘Shootout At Wadala’ is the biggest example of that. As an actor, which one do you enjoy playing more, the heroic cop or the negative villain?

Well, I have played the bad guy several times in my career already. Even in my last film ‘Kaabil’ with Hrithik, I played the villain and hence it’s as you know not new for me. Plus what matters more is always the script and the character and not which side of the story you are in. Be it the villain or the hero, its always the script and the character that matters more.

Yes, I do like watching thrillers a lot. It may or may not have the mafia part but I personally love the genre and some of my favorite shows are in the thriller genre.

So, which is your favorite thriller?

Despite so much of an experience, you are still bang on when it comes to preparing for your roles. How do you go about preparation especially when it comes to such shady characters and how was the same for Line Of Descent?

It is not just about shady characters. Every kind of character that I play, I prepare a lot. There are questions that need to be answered and sometimes the answers to those questions are even 30-35 pages. I call that my diary. There’s a character breakdown and then there’s a scene wise breakdown and there’s a relationship breakdown. So there’s a lot of preparation that goes into the process whenever I take up any role.

Lastly, what was the most difficult thing for you when it came to preparation for Line Of Descent?

I have always said that the ‘Soul of the character belongs to the character’. So once you have all the characters and texts and situations and relationships in, it’s important to give all this the right soul and the soul has to be given the right shade. That I feel is the most difficult stage of preparation for any actor.