Panchayat a 10-episode web series on Amazon featuring Jitendra Kumar, the bright natural actor who played Ayushmann Khurrana’s gay partner in the film Shubh Mangal Zyada Savdhan, is currently streaming across homes throughout India. Jitendra is happy about the captive viewership. “People are confined to their homes right now. Panchayat brings a smile to their faces. It’s a light take on village life. We shot it in a remote village named Mahodia in the Sehore district of Madhya Pradesh. There was no place to stay for our crew in the village, so we would drive down from the nearest town every morning, shoot till sunset and go back to the village.” Jitendra who comes from a small town Khairtal in Rajasthan says it was easy for him to identify with the village and its problems.

“Villages started just a few miles from where I grew up. So I know about the problems of village life. What we see in Panchayat is real rural life. The village wears a deserted look. There’s no respite from the sunshine during the day time and no electricity during the night. I couldn’t see a single young person during shooting. I was told the young have all gone to the city. There were only old people and children in the village.”

Jitendra who is no stranger to the digital platform says it was a challenge working in a remote village. “I lost so much of my hair working in that climate. But I gained so much. Like my character, Abhishek Tripathy always thought of a panchayat the way we see it in our movies: a group of villagers assembled under a tree. But that is not the way a village panchayat functions. There is a proper office and meetings are held formally with appointments for the complainants.”

Jitendra hopes the web series will create some awareness about village life. “Normally the serials I do have me playing rural characters migrating to the city. This is the first time I’m playing a character who moves the other way, from the city to the village.”

However, Jitendra is quick to point out that Panchayat purports to entertain and not preach. “We need a bit of sunshine during these troubled times. I binge-watched all the episodes at home and enjoyed myself thoroughly. The endeavor is to provide entertainment. The message on rural life is not hammered in.”

The spontaneous actor who regaled us earlier in the web series Kota Factory says the digital platform is no different from a feature film. “When we were shooting Panchayat we were not thinking of the platform where it will be released. We worked on it with full dedication. The differences come in later in the volume of viewers that we get on the OTT platform and the casual attitude of the audience.”

Jitendra loved reuniting with Neena Gupta. “She played my mother in Shubh Mangal Zyada Savdhan. She now plays the head of the village panchayat. She plays a woman who knows her mind and looks after her home and serves her official duties without fuss. Neenaji’s passion for her work is truly inspiring.”

Jitendra says he didn’t get a chance to enjoy the success of Shubh Mangal Zyada Savdhan. “I got so many messages and calls from people who identified with my character. But before I could reap any benefits the Coronavirus broke out. Never mind! I am sure I will restart from where we left out as soon the situation normalizes.” 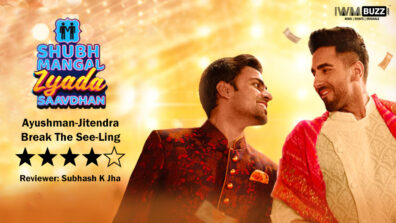