The gorgeous Kubra Sait made everyone sit up and take notice with her performance on Sacred Games. Since then she has only managed to give us more reasons to love her. Netflix’s Sacred Games became one of the most popular Indian web series. Safe to say, it has paved the way for digital content to grow in India. With a thrilling plot and strong cast consisting of Saif Ali Khan, Nawazuddin Siddiqui and Radhika Apte, the series delivered on all fronts.

But it’s not just the lead characters that shone through, equal credit must be given to the supporting cast who were extremely brilliants as well. And one of such actor who stood out the most is none other than Kukoo aka Kubra Sait.
Kubra plays the role of a transgender bar dancer and later Ganesh Gaitonde’s love interest in the series. Her first appearance was enough to send the nation into frenzy and we have been crushing on her ever since. And we have good reasons too! Model, Actor, Host – Kubra might have come into the spotlight because of Sacred Games, but she has been a part of the industry long enough to win beauty pageant titles, host shows and grab supporting roles in Bollywood movies. And what a good actor Kubra is. In fact, she played the transgender role so convincingly that people started wondering if she really is one. Within minutes, she had everyone captured with her magical charm.
The fact that she’s gorgeous only adds on to her screen presence. Tall, dark and beautiful – Kubra is one fine lady!
But there’s more to her than just being an actor with a pretty face. She is bold, unapologetic and speaks her mind. She often shares her views on various subjects and stands by it even after facing backlash from trolls. 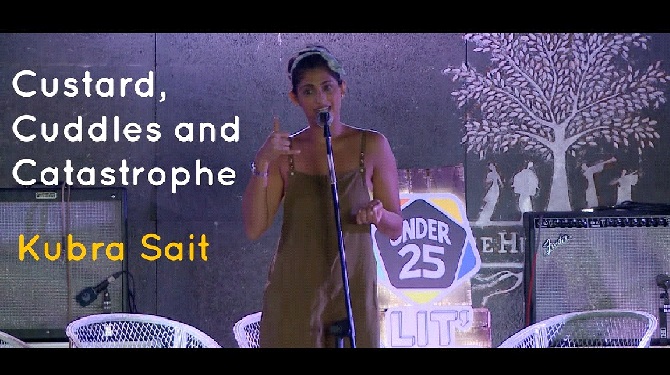 Kubra can not only nail it onscreen but also own a stage too. She is a regular performer on the Kommune Storytellers stage where she shares her experiences and thoughts, which are both hilarious and thoughtful. She even gave a talk on the TedX platform.

There’s certainly more to Kubra Sait then what meets the eye and we cannot wait for her to shine brighter in the future!