Abish Mathew is a very famous stand-up comedian who has a hilarious sense of humor and can make laugh even those who are facing bad days. Since the last five years, he has been recognized as the most comic personality in the country which has added variation to the industry of comedians. He has been a part of All India Bakchod Knockout (the notorious Ranveer Singh and Arjun Kapoor roast). He has also been the host of stand up competition, Comicstaan on Amazon prime video. He also hosted a talk show  ‘Son of Abish’. Most recently ‘Whoop” has been his latest standup comedy special show which was premiered on Amazon.

Being an alumnus of Delhi University, Ram Lal Anand College, he began his career as an RJ at Red FM, Delhi and thereafter switched over to stand up.

He is one of the well-recognized faces of Indian comedy who was also one of the first Indian YouTube Star who bagged 30 million views on his channel. 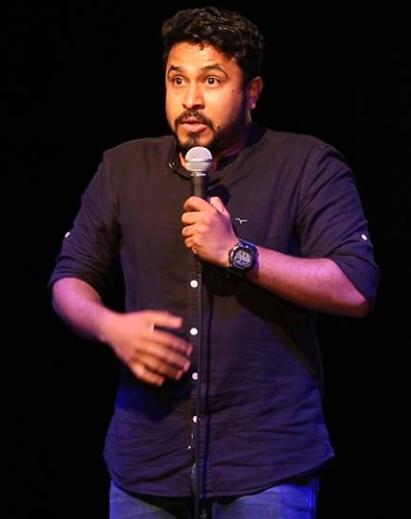 His outstanding comedy acts include sketches and stand-ups in his videos.  And his talk show has celebrities as the guest like AIB, Vishal Dadlani, Kanan Gill, Badshah, Cyrus Broacha, Vir Das, Radhika Apte, Taapsee Pannu and many more.

Having performed over 1000+ shows across India and worldwide, this personality has moved across the world including cities like New York, Canada, etc. He has also participated in the prestigious Utrecht international comedy festival (Holland).

Abish has also made debut in Bollywood with the film ‘Meri Pyari Bindu’ in 2017 and is roaming the country with his comedy show LOLStar.

He has a unique ability to make different forms of styles in one show. He can mix the show up with funny original songs, enact one-Mann sketches, shoot live videos online show with punch liners and can do the stand-up comedy at the purest best. This makes him worth watching live as he is an experimentalist every time. And he designs his shows individually which are custom made for comedy of his audiences.