Naveen Kasturia on The Good Vibes The story revolves around a couple (Naveen & Maanvi Gagroo) and their respective set of parents. “My character is someone who does not want to work right now but has some undisclosed plans for the future. His father (Rituraj Singh) keeps nagging him to get serious about life.”

When pointed out that the story seems a refreshing change from the now-normal sex and sleaze digital route, he says, “We always wanted to keep it realistic, and this is how today’s young professionals speak with their folks.”

Interestingly, he did not rule out some explicit stuff down the road. “As of now, it is a normal, relatable story, not out to shock or scandalize.”

All the 6 episodes of the Good Vibes have not been uploaded in one go. Rather, they are being streamed every four or five days. “Personally, I am all for binge watching, but here, the makers feel that staggered webcast (also on YouTube) makes better sense. Being only the actor, I am no one to question their wisdom.”

He really enjoyed working with senior artists like Mona Ambegoanker, Anant Mahadevan and Kishori Shahane in The Good Vibes. “It was surreal rubbing shoulders with veterans whom I had watched while growing up. I even reminded Mona mam of one comic show she had hosted years back on Doordarshan.”

Coming to his co-star, he says, “Having worked together in Pitchers before, Maanvi and I have a comfort level which makes acting easier. I also don’t need to seek her permission before trying something new on screen, for she just plays along, being a giving actor.”

Naveen, who has done films too, regards Bose as his most challenging role so far, “For I had to play someone who I was not; most of my other projects were well within my comfort zone. But this historical made me essay a nineteen forties cop who ages on screen. Although I loved it when I was first offered the same, I was hesitant about whether I would be able to pull it off or not.”

Looking ahead, Naveen has another big web project up his sleeve, but would prefer the makers to do the talking. 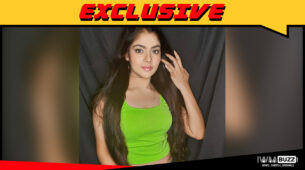