Mukul Dev who will be part of the ZEE5 series of Contiloe, State of Siege 26/11gets into a conversation. Veteran film and TV actor Mukul Dev is quite excited about his upcoming ZEE5 web-series, State of Siege 26/11.

Says Mukul, “Most films on the horrific terrorist attack on Mumbai back in 2008 talk about the assault and how it was bravely fended off by Indian security forces.”

“But ourAbhimanyu Singh presentation goes across the border to trace the entire planning, which took place in Karachi, thereby implicating Pakistan for the same.”

Here Mukul adds that, “It was not tough to get into Lakhavi’s mind, having already done deep research on Pakistani terrorism for the film Omtera (which I wrote) which was on the British jihadi Omar Shaikh who murdered American journalist Daniel Pearl. So l know the entire Jihadi network including Lakhavi, who in a way later become the cannon fodder in Pakistani terror game. For he is now languishing in a Pakistani jail, while boss Hafiz Saeed still roams free in Lahore.”

“Understanding what goes on in a terrorist’s mind, I deliberately did not follow the stereotype version of a buffoon evil man. My character also only wears a pathani suit without the jacket and skull cup.”

“His evilness can be judged simply by the fact that he sips tea while passing instruction to his men, creating havoc in Mumbai. Many of the taped conversations between the 26/11 perpetrators and their handlers have a distinct Punjabi voice shouting off instruction, which belongs to Lakhavi.”

“His sharpness can be further judged by the fact that all the10 guys (including Kasab, who was later hanged) chosen for the mission came from poor rural backgrounds. They were not even told of their target until the very last when they could not back out.”

“The scene in the end after the siege fails, he just gets up and welcomes a new bunch of terrorists to his lair, showing how emotionless he was.”

“Having a Yankee director Matthew Leutwyler helming the ship, we did not tilt to either the Indian or Pakistani perspective, but only the truth as it is known,” says Mukul last seen in 21 Sarfarosh Saragarhi 1897 on Discovery Jeet and Netflix.

State of Siege 26/11 which will start streaming on ZEE5 on Republic Day. It also has Arjun Bijlani, Arjun Bajwa and Saqib Saleem among others. 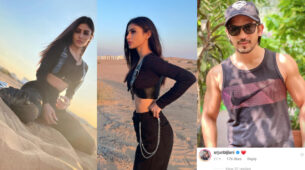