For Producer Aritra Das, his first short film Cakewalk is like his baby and he found it apt to tattoo the title on his hand... When you are young and passionate, you are definitely emotional too.

Producer Aritra Das from Assorted Motion Pictures, created a record by getting his movie titled inked. He is definitely India’s first Producer to get his movie name inked permanently on his wrist. “I was completely shocked to see him at the airport while we were travelling to Lucknow for our musical promotion,” informs playback singer Rupali Jagga who was the first one to break his news on her social media platform.

Rupali and music director Shailendra Kumar were surprised to see that Aritra had inked the title of the film on his wrist. “For a while I thought it was temporary and he is trying to impress all of us, but when I realised that he has actually taken all the pain to get a real tattoo done, I was impressed,” says lead actor Tarun Malhotra who was also travelling with the team.

Aritra’s tattoo caught attention amongst youngsters at the musical event in Lucknow and he was seen flaunting his latest inked possession with students. “The idea came to my mind after Lakme Fashion Week. While we were waiting for Esha and Hemaji to walk the ramp, I noticed models getting temporary tattoo done. That’s when I was toying with the idea of getting something inked. Finally I decided to get ‘Cakewalk’ written on my wrist because this film will always remain special in my life. It’s like my first baby,” says Producer Aritra Das.

When quizzed director Ram Kamal Mukherjee on this, he said, “I feel that this is a unique trend, and I don’t think any Producer till date ever inked their film’s name. I guess this shows how much passionate he is with the product. And I wish him all the best in all his future endeavours.”

Produced under the banner of Assorted Motion Pictures and SS1 Entertainments, the film stars Esha Deol Takhtani and Tarun Malhotra as lead, while Anindita Bose and Siddharth Chatterjee plays pivotal role. The promotion of the film created record, as this is India’s first ever short film that travelled to London, Dubai, Jaipur, Kolkata, Hyderabad, Bangalore and Lucknow. The team intends to travel all across India which will set a different benchmark for all short films. 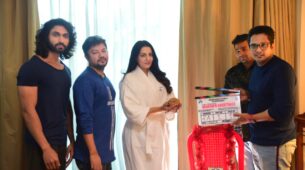