The trailer of Hansal Mehta 10-part web series Scam 1992: The Harshad Mehta Story promises an experience that would dig deep into the biggest financial scam of India and then comes up with some uncomfortable questions as to how and why such a monstrous fiscal aberration was allowed to happen right at the heart of India’s economy.

Judging by what we see in the trailer it would be safe to say Hansal Mehta is the perfect fit for bringing Harshad Mehta’s shameful story to the screen. For one, they are both Gujaratis and I think Hansal understands a Gujarati’s religious reverence for money.

Also, Hansal has made bio-pics on varied persecuted people from Shahid Azmi (Shahid) to Dr Srinivas Ramchandra Siras(Aligarh). The knack of hitting all the right notes in framing a credible comprehensive true-life story is amply on display in the trailer of Scam. Gujarati actor Pratik Gandhi makes a convincing Harshad Mehta, not because they resemble one another. But because Gandhi has caught on to Harshad’s fighting spirit. His ability to remain steadily on top even it was a garbage heap underneath him.

Oh yes, Shreya Dhanwanthary plays the journalist Sucheta Dalal who broke the Harshad Mehta scam story. To have the storyteller as part of the story is a clever move. I can’t wait to see where one Mehta takes another on October 9 when the series starts streaming on Sony LIV. Scam 1992 is from the stables of Applause Entertainment. 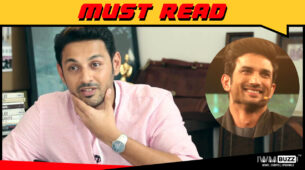