Well, besides her honey-coated voice, it’s her beautiful looks and cool girl-next-door style that makes her so relatable. Dhvani Bhanushali is an Indian model turned singer. She is a Maharashtrian by birth and she rose to fame with her carpool mashup of the songs “Shape Of You” and “Gulabi Aankhen,” alongside singer Sandesh Motwani.

Her passion for music led Dhwani to create a YouTube channel, which became the turning point of her career.

Dhvani was very popular in Bollywood since the beginning, but it was only after the release of her music video “Vaaste” that she gained immense popularity among the public. She is a very hardworking girl and has worked hard since the very beginning. She has beauty, brains as well as an amazing voice; well, a total package.

Apart from having an interest in music, Dhvani has also been brilliant at her studies. She did her schooling from a private school in Mumbai. Later, she enrolled in HR College of Commerce and Economics, Mumbai, to pursue her graduation in Business Management and Entrepreneurship.

Today, she completed her graduation and shared a few pictures from her graduation ceremony and with her family on her social media. She captioned the picture as “Time to adult! Officially #graduated ”

Congratulations to Dhvani Bhanushali on completing her graduation.

Below are the pictures she shared on her social media. 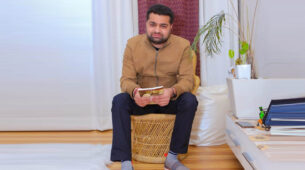