WhiteHat Jr app, an edu-tech platform, aims to help young minds master the art of coding and become the next Mark Zuckerburg or Elon Mask, as one can decipher from their advertisements.

Lockdown and no school has meant a boom for the ed-tech sector and WhiteHat Jr, the app, bubbled its way up through the clutter after being acquired by Byju’s, another company with a similar product DNA.

Now, the debate or the argument regarding the efficacy of classroom vs online learning has been on the rise. These companies have enough marketing muscle to get the biggest of influencers to push the narrative. WhiteHat Jr is endorsed by Sonu Sood and Farah Khan. At the helm of affairs is Karan Bajaj, ex Discovery executive.

However, the app’s growth story seems to have hit a snag wherein a parent, an active user of the app has made some serious allegations.

Neha Jain, a parent and working professional called out WhiteHat Jr openly on LinkedIn alleging that her 9-year-old rank-holder kid started to get ‘depressed’ because the assigned teacher for her child has been very rude to him. She has also alleged that instead of properly teaching the child, the teacher used to be on ‘mute’ for 70-80% of the class duration.

Not just that, she also alleged that she reached out to founder Karan Bajaj to seek solution but he apparently tried to brush it down by just offering 4 free classes to the child.

Below are snapshots of the accusations: 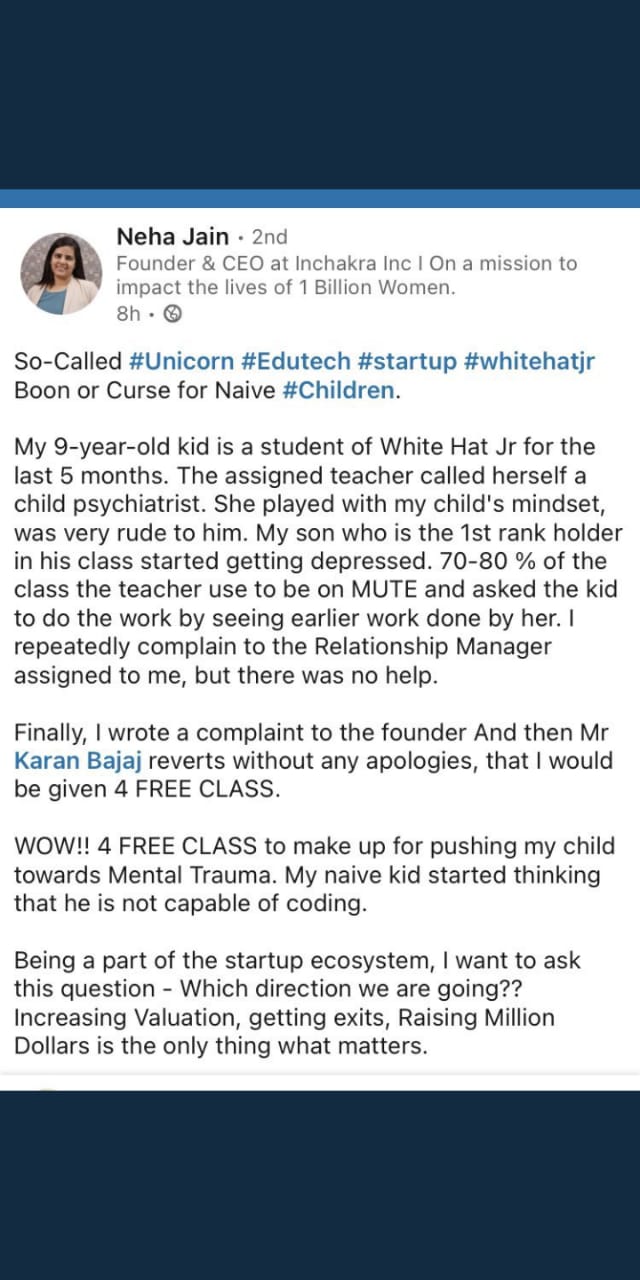 To get the other side of the story, we made multiple attempts to solicit relevant comment from Karan, however, he chose to remain silent on the issue.

Sonu Sood, called the modern-day messiah for his social work related to Covid 19, when asked about the allegations, given his reputation and credibility, said that he will convey the concern.

Farah Khan did not respond.

WhiteHat Jr’s core target audience is kids, who are the future of our nation, and as someone endorsing it or owning it, must ensure absolute transparency and righteousness in its process and dealings.

IWMBuzz will keep you posted on further developments. Trolls have no spine: Sonu Sood Sonu Sood on his bio-pic