Zero Kms is quite different from my other films: Director Qaushiq Mukherjee
Subscribe Now
Digital | Personalities Says Q, “We have shot 10 episodes of 20 minutes run length; hence the story moves very fast. It deals with the very burning issue of human trafficking, but we have mixed it with MMA action and gaming.”

Is the story bold as most desi offerings are? “It is quite different from what I am known for. We have not used any such devices. Having a gaming backdrop, we were sensitive to not having any kind of content undesirable for children.”

Q has earlier made sex comedy, Brahman Naman. “I have also made the punk, coming-of-age flick, Gandu, besides horror flick, Ludo.”

Asked about casting Naseeruddin Shah in Zero Kms, he says, “I have known him well since a while, but never thought about working with him. However, when my partner suggested his name for this very nebulous character, I said yes, knowing that he could take it to a different height, which he has.”

“We seem to be getting a good response in the first few days of its streaming. I am hopeful of success, which will then change the ball game. Right now, we have to work with limited budgets, which is an even bigger challenge in an action format, as compared to my staple diet.”

Talking about the web format, he says, “It gives you the required space to tell different kinds of stories. However, things are quite nascent, as we are not yet sure of the target audiences.”

“Web players like Netflix are a boon to independent filmmakers like us, who, otherwise, would not get commercial release. Sometimes, rather than commissioning, they buy out content, like they did with Brahman Naman as their first Asian original.”

He is also among the few brave filmmakers who are attempting to make films on contemporary political realities. “Garbage, the story of a woman-abusing right-wing troll, is the only Indian film to have been screened at the recent Berlin Film Festival. We have got rave reviews. I hope to release it later this year, albeit, not commercially.” 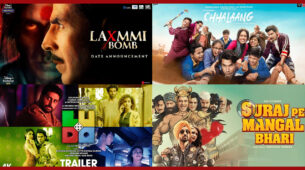