The Viral Fever (TVF) has announced its second partnership with Association of Mutual Funds in India (AMFI) for its upcoming dramedy web series ‘Yeh Meri Family’. Starring Mona Singh and Akarsh Khurana playing the roles of the affable parents, the show will surely help 90s kids get a nostalgia fix. TVF had previously partnered with AMFI for the second season of The Timeliners’ super-hit web series ‘The Aam Aadmi Family’ which has garnered 25 million views till date.

Set in Jaipur over the events of the summer vacation of 1998, Yeh Meri Family, the 7-episode series revolves around the simplicity in conflicts, emotions and bonding of the five-member Gupta family. The protagonist – 12-year old street-smart Harshu (Vishesh Bansal), 15-year old adarsh beta Dabbu (Ahaan Nirban), 5-year old Chitti (Ruhi Khan) – the apple of the family’s eye, the quintessential 90s mom – Mummy (Mona Singh) and the engine of the family – Papa (Akarsh Khurana) – each character lends a beautiful hue to the family dramedy.

Created and directed by Sameer Saxena (also the creator of Permanent Roommates & Tripling) and written by Saurabh Khanna (Creative Director for Permanent Roommates S2), the musical notes for the series have been strung together by TVF’s ace music director Vaibhav Bundhoo (TVF Pitchers, Permanent Roommates, Humorously Yours and ImMATURE –yet unreleased, official selection at Canneseries, April 2018). Singing legend Udit Narayan has lent his voice to one of the tracks of the show.

Sameer Saxena, TVF’s Chief Content Officer and Head – TVF Originals said, “Yeh Meri Family is one of our biggest original web series till date and something that the TVF team is really excited about. We have put a lot of heart and soul in this show for the content to resonate with viewers. Set in the 90s and peppered with incidents that will make everyone smile and fondly remember their days gone by, along with characters that every single person can relate to, the show will have a universal appeal. It can and should be watched with the entire family. In the past, TVF gave a new direction to web entertainment with Pitchers, reinvented romantic comedies for India with Permanent Roommates, and gave road trips a new turn with Tripling. Now, with Yeh Meri Family, we intend to give a whole new dimension to family shows.”

Saurabh Khanna, Writer – Yeh Meri Family said, “Yeh Meri Family was a difficult series to write as the drama has to come from ordinary routine of daily life. There are characteristics that every mother, by virtue of her being one, imbibes. As the series captures only these characteristics, everybody is bound to see a shade of their own mom in ‘Mummy’, their dad in ‘Papa’ and their elder siblings in Dabbu. This is our attempt to make a show which the entire family can watch and enjoy together.”

Essaying the role of the mother in Yeh Meri Family, actor Mona Singh said, “This is my first web series with TVF and they have made me feel like family since the very first day. It feels great to be associated with them. I play the role of the tough-nut-to-crack Mummy who knows her kids inside out and is often difficult to fool. I am certain that viewers will fall in love with Yeh Meri Family and our characters.” Mona, best known for her role as Jassi, has earned much love for her girl-next-door roles on television.

Akarsh Khurana, portraying the role of the father said, “Tripling remains among my most successful and enjoyable projects, so it made sense to do my web series acting debut with my friends at TVF. With Sameer Saxena at the helm of things, how could I refuse. Yeh Meri Family is a beautifully written show, full of nostalgia and relatable moments. In addition, getting a chance to act opposite Mona Singh, a legend in her own right, was a privilege. I’m super excited about people watching the show and making their families a part of ours.” Akarsh’s latest directorial project High Jack released last month and he is currently working on his next Bollywood film Karwaan.

Tune in to watch Harshu learn to love his family on 12th July. The web series will release on TVF’s YouTube channel and TVF Play simultaneously, with new episodes releasing weekly. 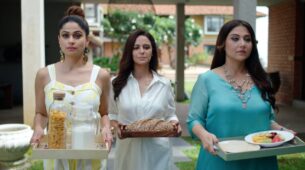