We all know her from Koi Mil Gaya and we loved her dearly from that very time. From being a famous TV kid now she is the diva, she has been entertaining us for a very long time. As of now, she worked in several Tamil films. She looks so darn beautiful in everything she wears. She never fails to amaze us with her fashion attires.

We recently came across her TikTok videos. And we can’t take off our eyes for even a moment. Her TikTok chronicles are worthy of our constant attention. Hansika has a whopping 1.4 million followers on TikTok. Her TikTok videos are filled with comic reliefs. We absolutely enjoy watching her on TikTok like we do on screen.

Hansika Motwani began her TV career with Shaka Laka Boom Boom. She also was a part of an Indian daily soap, Des Mein Nikla Hoga Chand and later she appeared in Koi Mil Gaya with Preity Zinta and Hrithik Roshan. Motwani made her debut when she was only 15, as a lead in Puri Jagannadh’s Telegu Film Desamuduru and also earned the Filmfare Award for Best Female Debut-South for her performance. She made her Bollywood debut at the age of 16 as a leading actress in a Bollywood film Aap Ka Surroor with Himesh Reshammiya.

Today, we have lined up some of her TikTok videos down below, check them out and get ready for some sensuality. Have you seen this rare and unseen sexy photo of Hansika Motwani yet? 5 Films Of Hansika Motwani You Must Watch 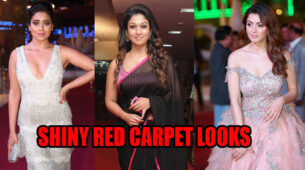 Shine Like A Star In These Shiny Red carpets Looks From Shriya Saran, Nayanthara, and Hansika Motwani