Emilia Clarke’s Best Leather Outfit Looks Are Here, Which One Is Your Favourite? | IWMBuzz
Lifestyle | Fashion

Emilia Isobel Euphemia Rose Clarke is a British actress. Emilia was born on 23rd October 1986 in London, United Kingdom. Clarke’s television debut was in the BBC One medical soap opera Doctors in 2009 in which she had a guest appearance. Emilia had her breakthrough in the HBO epic fantasy series Game of Thrones in which she played the role of Daenerys Targaryen, Emilia also received international recognition through Game of Thrones as the series, as well as Emilia’s character, was loved and appreciated worldwide.

Along with television series, Emilia has been a part of many films as well including Terminator Genisys in which she played the role of Sarah Connor, Me Before You, Last Christmas, and many more. Emilia was also named one of the 100 most influential people in the world by Time magazine in 2019.

The list of achievements is never-ending, the more we talk the more we have. The super talented star has made several achievements and we are well versed with her amazing acting skills but besides that, Emilia has a great sense of styling and fashion as well. When talking about Emilia’s style the beautiful actress likes to keep it casual, classy, and simple. If we were to describe Emilia’s fashion style then we will say that the star has a very elegant way of dressing. When it comes to fashion, Emilia likes to keep it minimalist yet fashionable. If you’re looking for something similar to this then you should definitely check Emilia’s amazing outfit looks.

In this article, let’s have a good look at some of the leather outfit looks that Emilia styled that we completely loved. 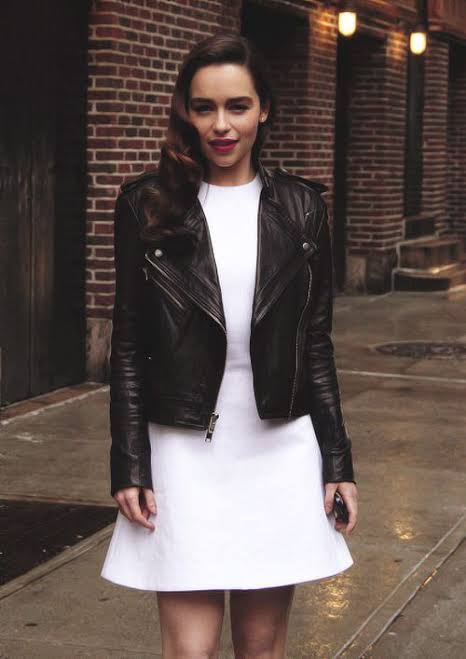 Ace Your Basics: GOT Fame Emilia Clarke Vs Cameron Diaz: Which Beauty’s Style Will You Steal?

Patriotic Dressing: Taylor Swift Vs Katy Perry Vs Emilia Clarke In American Flag Outfit: Whose Style Would You Steal This Patriotic Day?