Fashion designer gets engaged in a two-day dazzling ceremony City-based fashion-designer Sirisha Reddy got engaged recently to businessman Aashwij Reddy from Hyderabad in a grand ceremony in the bride’s hometown, Kurnool. The two tender hearts got to know each other for a few months of courtship before their engagement ceremony, while the marriage was arranged by their respective parents.

Sirisha Reddy, daughter of businessman Rajshekhar Reddy and Devi Reddy, is an acclaimed fashion designer. She shot to fame with “Sirisha Reddy Label” which she had launched along with her brother Sanjay Reddy, who is an interior designer and businessman.

“Sanjay has been a tower of strength throughout my life, and has been super supportive of my7 fiance as well,” said the would-be bride with smiles, while speaking about her brother.

Aashwij Reddy, son of renowned builder Narasimha Reddy and Rama Reddy, is a graphic designer, who has worked in Australia for the past few years. He will now be shifting base to Hyderabad to stay with his beloved.

The Covid-19 pandemic restricted the number of guests at the glitzy, with only close family members and friends in attendance, who followed the health protocols. “Even though we were slightly disappointed as we couldn’t do it at a grand scale that we would have liked, it was a blessing in disguise, as we got to spend quality time with our near and dear ones over the two days which wouldn’t have been possible otherwise,” said Sirisha.

The two-day event featured a Mehendi ceremony in the first evening of the two days long ceremonies. Ganesh and Lakshmi pooja was held on the morning of the second day. The finale of the ceremony was with the glamorous ring ceremony.

The entire wardrobe for the bride, groom and each of the family members was conceptualized and designed by the “Sirisha Reddy label” with its singular focus on quality. The label has its ethos of blending modernity with tradition.

The couple showcased their intricate design aesthetics in each of the ceremonies, with the bride wearing an elegant turquoise lehenga and the groom complimenting her look with a sea-blue silk shirt for the mehendi ceremony. For the morning poojas, the bride adorned a traditional parrot green silk lehenga and was bedecked with elaborate jewelry, while Aashwij looked dapper in an embroidered red silk Kurta.

At the ring ceremony, the bride looked stunning in an exquisite emerald lehenga with embellished silver detailing and glass pieces complimented by a glamorous diamond choker, while the groom turned heads attired in a matching sherwani.

Guests were captivated by the decor which was designed keeping with a traditional ethos in mind. While the decor for the Mehendi ceremonies and the morning poojas had a minimalist approach, the ring ceremony involved extravagant decorations with the hallmark being a multicolor flower engagement as the centerpiece. The guests in attendance were left awestruck by sumptuous traditional South Indian dishes throughout the day.

Being creative individuals, the couple also took their shared love for design and technology further with the #siriaashu hashtag and a bespoke logo designed especially for their union. They now excitedly await their marriage ceremony on December 10 this year. Jennifer Winget VS Shivangi Joshi VS Erica Fernandes: Whose Lehenga Look Is Perfect For Lockdown Wedding? Ashnoor Kaur and Arishfa Khan slay Hot and Sexy Lehenga and these pics are proof! Niti Taylor and Anita Hassanandani are giving us fairy tale goals in this dreamy lehenga! 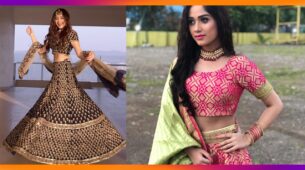