Did You See How Amazingly Gorgeous Halle Berry Looked at Oscars 2021 In Purple? Go Find Out Here | IWMBuzz
Lifestyle | Fashion

Halle Maria Berry is an American Actress. The gorgeous actress was born on 14th August 1966 in Ohio, U.S. Berry started off her career as a model, Halle also participated in various beauty contests and was the first runner-up in the Miss USA pageant, the beautiful actress also secured a sixth position in the Miss World 1986.
Berry made her film appearance in Spike Lee’s Jungle Fever in the year 1991 in which she played a small role as Vivian. Halle’s breakthrough role came in 1992 with the romantic comedy Boomerang. The talented actress has been an important part of many films including Bulworth, The Flintstones, Monster’s Ball, and many more.
Halle Berry also won an Academy Award in the category of Best Actress for her role in the romantic drama film Monster’s Ball. Berry was also one of the highest-paid actresses in the 2000’s in Hollywood.
Oscars are the most prestigious award ceremony in the entertainment industry and celebrities from all over the world show up to this stunning occasion. Oscars’ red carpet is filled with glamour, celebs put on their best look and serve everyone with their stunning attire.
Halle Berry amused everyone in her gorgeous soft purple Dolce & Gabbana strapless gown that featured a plunging neckline. The actress also stuns everyone with her new hairdo that was a new bob haircut with baby bangs. Halle definitely made a statement on the red carpet in her new look and gorgeous gown.
Have a look at Halle’s beautiful purple gown.

Also Read: Amanda Seyfried looked like a princess in her red gown at Oscars 2021, Yay or Nay? 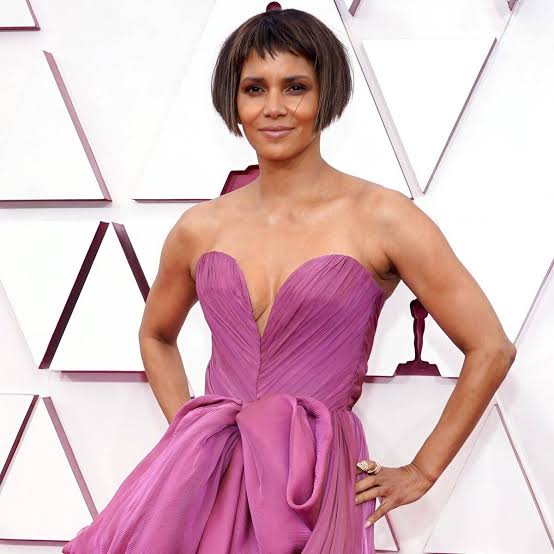 Times When Seventeen Made Us Spellbound With Their Award Function Outf...