3 Hollywood Actors With Most Tattoos, Know Who | IWMBuzz
Movies | Celebrities

Take a glimpse at the heavily tattooed celebrities in Hollywood!

Tattoos are a form of art done on the skin which includes different designs. They are increasingly becoming more and more mainstream and being accepted by everyone but it’s still very rare to see actors with tattoos given that they have diverse and many versatile roles to play. However, there are some brave actors who have inked themselves and at the same time managed to carve a name for themselves in the acting field. Today we look at 3 Hollywood celebrities with the most tattoos. Johnny Depp best known for his role in the movie Pirates of Caribbean is one of the most tattooed personas with ink designs on his back, his legs and arms, hands, and fingers. According to screenrant reports, the actor has carved mostly tattoos related to American culture on his skin that comprises a native American lightning snake design on his forearm, Comanche shield on his shin, and several other designs including names of his children, sparrow tattoo, and many more.

Angelina Jolie who is popular for her insanely beautiful looks is also one of the most heavily tattooed celebrities in Hollywood. The beautiful actress sports smaller tattoos of small scripts on her arms and coordinates of the birthplaces of her children and ex-husband Brad Pitt. Her back is covered with a Bengal tiger tattoo and a yantra blessing tattoo as per screenrant reports.

Dwayne Johnson has a lot of ink work on his body including a tattoo that reflects his sun sign (Taurus). He has tattoos on his upper right arm, his chess, and his back. Dwayne has more big pieces of a tattoo on his body as compared to other celebrities who generally opt for subtle and small tattoos that become much easier to cover up with makeup. Take a glimpse at these actors who have the most number of tattoos. 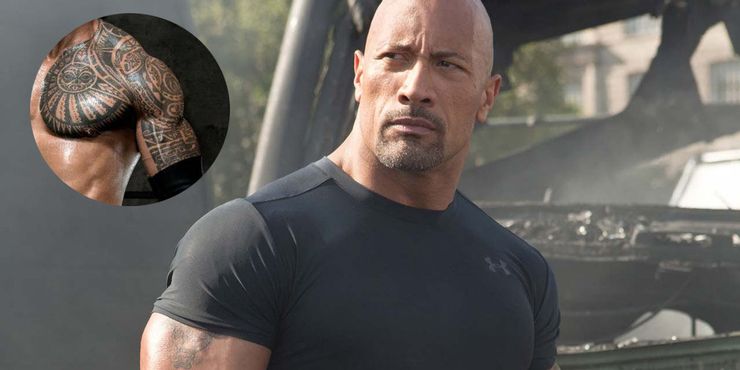