Men will be men. And their first love will always be either bikes or cars. There’s no exception even among Bollywood stars. In fact, there have been Bollywood actors who went as far as gifting others with expensive BMW cars. (Yes, we’re talking about SRK!) As per media reports here’s a list of Bollywood actors- Akshay Kumar, Arjun Rampal, and Sidharth Malhotra, who are absolutely in love with their bike collection.

Akshay Kumar’s obsession with his collection of bikes is no secret to anyone.

His Custom Royal Enfield Thunderbird 350 is definitely one of the coolest bikes! The customized flames on the bike give it a fiery hot look. Designer Vardenchi put in extra work and modified it for the film, Oh My God, and Akshay just fell in love with the bike all over again.

Among his list of bikes, there is also the Yamaha VMax, which he sometimes uses in his films including Desi Boyz. This bike of his cost somewhere around Rs 27 Lakhs when he had purchased it. Honda XRV 750 is one of the old-generation bikes that Akshay once owned.

And of course, we can’t leave out a Harley Davidson from this list. John Abraham, a bike enthusiast gifted Akshay Kumar with this wonder, the Harley Davidson V-Rod, to celebrate the success of their movie Garam Masala.

Arjun Rampal while he doesn’t have an extensive collection like Akshay, doesn’t mean he doesn’t love bikes. Quite a while back, Arjun came out with India’s first superbike, Hyunsung by Gaware motors. At the promotions, you can see him posing with the two bikes looking absolutely stunning.

The young actor from the Student of the Year, Sidharth Malhotra has an eye for his rides! He has a gorgeous collection of cars and bikes. He owns a gorgeous Harley-Davidson, Harley Davidson Dyna fat bob to be specific. The bike cost around 14 lakhs.

While there are definitely many other actors that could make this list, check out the photos of these actors with their beloved bikes. 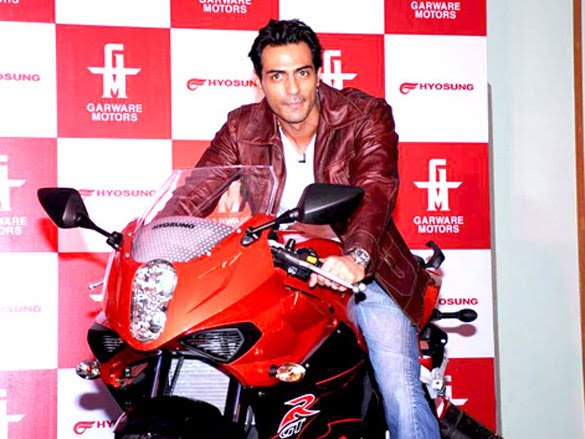