Read here: To find out Who Is Anand Ahuja? Know Everything About Sonam Kapoor's Husband Anand Ahuja is the husband of Bollywood Fashion Diva, Sonam Kapoor. He is a Delhi-based fashion entrepreneur, who runs a fashion label called Bhane. The showroom is in New Delhi’s upscale Meherchand Market.

Anand Ahuja was born in Delhi on 29 July 1983. He spent his childhood in Delhi’s posh Jor Bagh locality and presently lives in Golf links, a neighborhood in New Delhi.

Ahuja’s grandfather, Harish Ahuja, runs Shahi Exports, one of India’s largest Export houses, while Anand is the managing director of it. Ahuja did his schooling from American Embassy School, New Delhi. Then completed his Bachelor of Science, Economics, and International Relations in 2007 from The Wharton School of The University of Pennsylvania in Philadelphia, Pennsylvania, USA. Later, pursued his post-graduation in MBA from the University of Pennsylvania, Philadelphia, USA, he somehow couldn’t complete it.

Ahuja is the owner of a popular clothing Brand named Bhane. Besides that, he also owns VegNonVeg, India’s first multi-brand sneaker store.

Anand is also a sports enthusiast. Ahuja was born into a Business class Hindu-Khatri-Punjabi family. His parents are Harish Ahuja and Priya Ahuja. Anand’s father is a businessman while his mother is a homemaker. Anand has 2 younger brothers named Anant Ahuja and Amit Ahuja.

Talking about his love life, many sources have revealed that Anand and Sonam first met in 2014, when he was introduced to Sonam’s Fashion entrepreneur, Pernia Qureshi. The couple started dating and tied a knot on 8th May 2018 in Sonam’s aunt, Kavita Singh’s Mansion in Bandra, Mumbai. 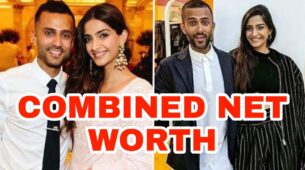 Revealed! Combined Net Worth Of Sonam Kapoor And Anand Ahuja Will Simply Shock You