How are Disha Patani and Allu Arjun related? You will be AMAZED | IWMBuzz
Subscribe Now
Movies | Celebrities

Find out how Disha Patani and Allu Arjun are related Disha Patani and Allu Arjun are both two of the biggest and the most popular individuals in the Indian entertainment industry at the moment. Although Allu has been there and ruling the roost in the South film industry even before Disha made her debut in Bollywood, both of them are today pretty much at par when it comes to National fame and popularity.

While Disha is known for her fantabulous acting skills and for her hotness and sensuality quotient, Allu is known for his high-octane action drams and cult hook steps. Both of them have so far not worked with each other ever. So how are they related? Well, it’s an interesting story.

Once during an interaction with a South based entertainment channel, when Disha was asked about her take on Allu Arjun, she had mentioned that she is a huge admirer of his work and respects him. Not just that, she had also mentioned that it is her dream to one day perform Allu’s hook step in the famous song ‘Top Lessi Podi’ with him.

Well, quite adorable indeed ain’t it? For more updates, stay tuned to IWMBuzz.com 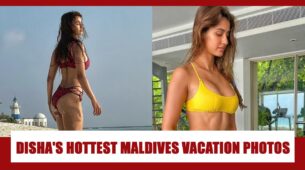