Check out our exclusive conversation with Urvashi Rautela ahead of the release of her ZEE5 film, Virgin Bhanupriya Urvashi Rautela is a stunner in the real sense of the term. Ever since the time she made her Bollywood debut way back in 2016, she’s been absolutely unstoppable. Year after year, courtesy a great deal of hard work and grit, Urvashi has reached new heights and is currently one of the youngest millionaires of our country. Her potential as an actor and add to that her super-hot and sexy personality which serves as a cherry on top, Urvashi is certainly one of the most bankable names, especially when it’s about a project dealing with societal stigmas and taboos. Her next film is Virgin Bhanupriya which is all set to release on ZEE5 on 16th July 2020.

The title of the film is something unique and different. When Urvashi was asked about the title and the use of the word ‘virgin’ in it, she said and we quote,

“Well, we all realize it’s extremely important that we stop becoming judgemental about personal things. Virginity, I feel, is a very personal thing and one should be left at his or her own zone and should not ever be scrutinized or bullied about it. It is high time we stop treating words like virgin as a taboo or feel shy about it because it is just another word. That’s exactly what we are trying to communicate and hence the title, I personally feel is very apt.”

Virgin Bhanupriya sees Urvashi in an unseen avatar and she’s certainly the hottest ‘geek’ around with those geeky glasses. When asked more about how she likes her own look, she added,

“Yes, this was one particular thing that attracted me even more. My look in this movie is extremely different from how people have seen me earlier. And I really really like those glasses, to be honest. Our film deals with a very important subject and we have tried our best to put forward our communication in a nice and structured way. Mental health is something very important and the last thing which we want in today’s society is people to be bullied because of being or not being a virgin. Live and let live is what people should follow and I hope the audience really like our project.” 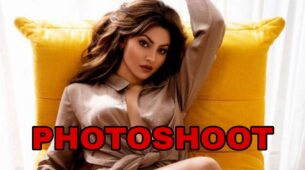