The much-acclaimed movie of Housefull and its sequel have something in common which is very apparently Akshay Kumar in the main lead male role. The 4th sequence of the film is being shooted in London and social media is buzzing with the new looks of Akshay Kumar for this upcoming project.

He is sassing the salt and pepper look on the sets of Housefull 4 as seen in the newly post pictures. He is simply looking amazing in his new avatar. Also, pictures have Ritesh Deshmukh in having fun with Akshay’s looks.

Also, Kirti Sanan is seen in one of the pictures where Akshay is donning the perfect look in Salt n pepper getup.

The film Housefull 4 release is speculated to be around 2019 Diwali that is in October month.
If the news is to be believed then probably Sanjay Dutt or Nana Patekar would also be playing an important role in Housefull 4. 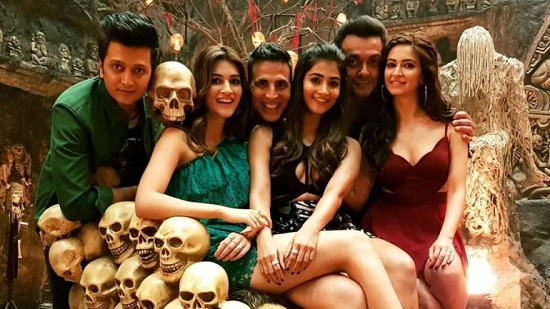 This movie is reported to be the biggest budget comedy film produced in Bollywood and the credit goes to the producer Sajid Nadiadwala. He has been encouraged by the success of the first three franchise of Housefull movie. And therefore, he has produced this comedy sequel which would be having a lavish budget and amazing star cast including Bobby Deol, Kirti Kharbanda, Rana Daggubati, Amanda Rosario, Puja Hegde, Boman Irani, and Nawazuddin Siddiqui.

It is also stated that the director has been changed from Sajid Khan to Fahad Samji.

Housefull 4 is reincarnation comedy in which the narrative will be showcasing the switch over from Baahubali-Era to the present day which means from the 16 to the 21st century captured by two cinematographers. Also, the film would be having 7 music composers who will composed soundtracks for the music. Multiple locations and lavish sets have made the film a very expensive comedy.

According to the director Farad Samji, this is going to be a period comedy that would be first of its kind. He also said that the looks, clothes and the set of films are done with the different levels of expense and perfection which makes this movie total yay for comedy genre lovers.