From Jab We Met’s Geet to K3G’s Poo, Kareena Kapoor Khan has played every role in her movies to the tee, and we could not be more in awe of her.

The Most Iconic Movies of Kareena Kapoor A.K.A Bollywood’s Bebo
The daughter of Randhir Kapoor and Babita and a younger sibling to Karishma Kapoor, Kareena Kapoor, also known as Kareena Kapoor Khan, is one of Bollywood’s most beautiful and talented actresses.Married to Saif Ali Khan and mother to the adorable celeb-kid Taimur Ali Khan, Bebo has won our hearts with her impeccable acting skills for decades. She’s presently the face of Lakme and is balancing her motherhood with her career real good.

Keeping under consideration her early start to a career, here is the list of the most iconic movies by our beloved Bebo:

1. Omkara (2006) – As Dolly Mishra, Kareena Kapoor Khan took our breath away with her astounding performance opposite Ajay Devgn and was even credited for her role.

2. 3 Idiots (2009) – Kareena Kapoor played Pia, the daughter of the professor (Boman Irani) and totally set the mark for an independent and bold daughter that no one could’ve done better.

3. Refugee (2000) – Her debut movie, where she starred alongside Abhishek Bachchan is definitely a must watch film.

4. Kabhi Khushi Kabhie Gham (2001) – Poo’s (Kareena Kapoor) one-liners will always be remembered in the history of Bollywood. Kareena’s character in this movie revolutionarised how the millennial are and needless to say, our generation could totally relate to this character the most, and have been Kareena fans ever since.

5. Jab We Met (2007)– The bubbly and chirpy Punjabi girl Geet, played by Kareena, won our hearts and her chemistry with Shahid Kapoor was simply to die for.

Time and again, Kareena Kapoor Khan has wowed the audience with her acting chops and we know that Bebo is one of those timeless actresses of Bollywood, who will be remembered for her characters and movies, for decades to come. 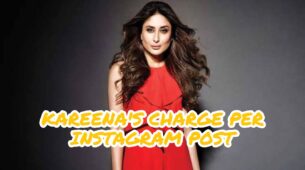