The media and Karan Singh Grover (KSG) fans have been in a sort of flux since yesterday, when KSG announced that he was quitting the Star Plus show, Kasautii Zindagii Kay.

Since KSG has not been speaking anything about the what and why, there has been lots of speculation about it. Some suggest that producer Ekta Kapoor was not happy with his track, hence he was eased out. While others suggest that the story needed to return to the love between Prerna (Erica Fernandes) and Anurag (Parth Samthaan), failing which KSG might be brought back.

There is yet another unconfirmed buzz saying that the channel is not very happy with the ratings, which have dropped recently, and has given Balaji Telefilms a warning to shape up.

In all this, there had been no word from KSG, until better half Bipasha Basu replied the following to a worried fan – 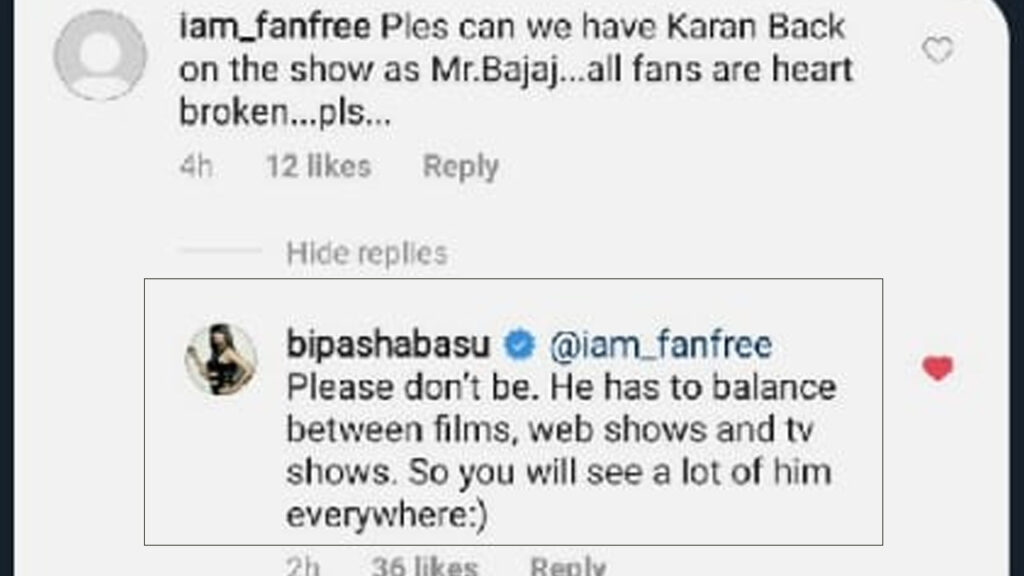 Reading between the lines, can we infer that KSG has a new film or is Bips referring to Aadat and other films, including Teen Dev, which has been stuck for a while? KSG, started his film journey with Alone, before striking gold with Hate Story 3.

As for the web, he already has Boss 2 after the success of Boss, so again, did she mean these or some fresh project?

She also mentioned TV; wonder which show she is referring to.

We tried to get in touch with both Bips and KSG, but could not get through to them.

We also failed to elicit a response from Star boss Gaurav Banerjee or producer Ekta, about KSG quitting and the future Kasautii track.