Student of the Year 2 is going to hit the theatres soon with its class of 2018 and we cannot take our eyes off of the female leads in this movie! Everyone remembers the movie that launched Varun Dhawan, Alia Bhatt and Siddharth Kapoor, and shot them to stardom and it wasn’t only because of these fresh actors but also because of the amazing plot, fresh concept and well-drafted storyline that the audiences enjoyed. Now after years, the sequel of this hyped movie, Student of the year 2, is all set to be released under the banner of Dharma Productions, directed by Punit Malhotra. It is one of the upcoming Bollywood movies of 2019 and interestingly, this movie is the debut film for both its female leads!
Described as the girl who is ‘In it to win it’, Tara Sutaria is the new addition to SOTY’s class of 2019 and has had some work in this industry, already credited to her name. This is her bollywood debut and she is already turning heads with her charming looks and amazing acting skills.

And then there is the new star-kid Ananya Pandey, daughter of famous actor Chunky Pandey, who has already trained hard and groomer herself well before the shooting of her debut film commenced.
Karan Johar himself was grooming both of them for their perfect debut. Both these beautiful ladies have already burnt many hearts by their glamour and charm. We can see both of them of the official poster of Student of the year 2, which has been published recently. We are really eagerly waiting for the film because this might just be the coolness we need in the scorching heat of May! Book you tickets for this 2019 flick in advance and get ready to see this awesome and youthful trio burn the stage with their acting, dancing and perfect chemistry! 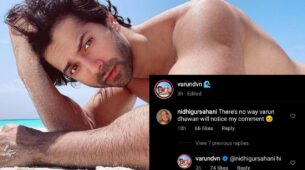