Take a look at Olivia Wilde and Olivia Culpo flaunting their red outfits.

Olivia Wilde is an American actress, filmmaker, and media personality who is recognized for her role in the series House, where she played Remy Hadley. She has also appeared in movies like Conversations With Other Women, Alpha Dog, Tron: Legacy, and many more. She began her career by acting in television series and climbed the ladder to Hollywood movies. She has worked in films like The Girl Next Door, Bickford Shmeckler’s Cool Ideas, and Turistas. Olivia Wilde was in the film Her, where she played the character opposite Joaquin Phoenix, for which she was critically appreciated. It was in 2017 that Olivia Wilde made her Broadway debut with the play 1984 where she played the character of Julia. Currently, Wilde is focusing on her directorial skills and new projects. Wilde has been seen in dazzling red outfits throughout her career and here are a few. In the first picture, Wilde is donning a dark red shimmery gown at the red carpet event. The gown has a plunging neckline and a knot detail in the front which helps define her waist. She paired long diamond earrings to complete the look. The next look features a pantsuit. Wilde is wearing high-waisted wide-legged silk trousers and a matching blazer. She paired the suit with a red lace bra, making them look classy and edgy at the same time. Olivia Culpo is an American media personality and a television actress. She is also known as a fashion influencer of America and a model who was crowned as Miss Universe in 2012, after winning the titles of Miss USA and Miss Rhode Island USA. As a fashion blogger, her style is trendy, different, and eye-catchy. Culpo flaunts her figure perfectly. Model figure in this outfit. She is wearing a red bodycon mini dress. The dress has a plunging neckline and puffy sleeves which add character to the dress. To complete the look she paired it with red heels. The next look gives us a street-style vibe, as she is seen in a pair of light wash blue denim and a red top. The top is off-shoulder with a sweetheart neckline and puffy sleeves. The choice of shoes is what makes the outfit interesting, she paired the look with red ankle-length boots. 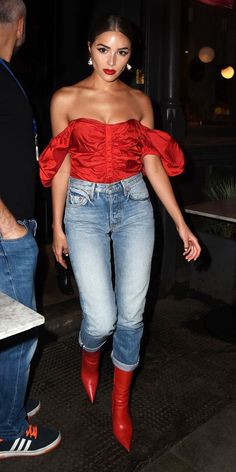 Have You Seen Olivia Wilde Shimmering In A Black Ball Gown? Pictures Here

When Elegance Meets Perfection: Shraddha Kapoor In Anita Dongre’s He...

Why You Should Not Sit Continuously For More Than Half An Hour? Know Y...