Who looks the sexiest in a bikini…Pooja Hegde or Samantha Akkineni? Take the poll down!

The divas from the acting industry leave no stones to unturn especially when they are flaunting their hot and bold personality be it on the screen or in their real life. We have been through many actresses who make us woo with their hotness quotient, especially the ones who have a bold personality. Among them, we have the two bikini babes- Samantha Akkineni and Pooja Hegde who are always ready to flaunt their bikini avatar, read to know more.

Pooja Hegde is the uprising star in Bollywood and there’s no doubt in it. The day she stepped into Bollywood with Mohenjo Daro opposite the most handsome man in the world, Hrithik Roshan, we knew there was something special about her. This lady on the big screen is almost the same personality as her real life. Right from nailing the stylish lehenga avatar to making us stare at her with her bold bikini looks, she has come a long way in the world of hot queens. She loves to flaunt her body in shape and the proof of what we are saying is her bold bikini snaps.

On the other hand, we have Samantha Akkineni who is declared as the crush of the nation by her fans as they can’t imagine anyone other than her elsewhere. The most liked feature of her is she can make you woo her in both ways- with her ethnicity on point and her western and sexy avatar which makes us drool! Give her a lehenga, saree, or bikini, she will leave you amazed with her every avatar. We can say that she makes it to the fullest in whatever she nails. We have been observing her for a long time and seeing her bikini looks do make her one of the hottest actresses.

Also Read: Pooja Hedge Or Suhana Khan: Who Has The Hottest Dusky Looks? 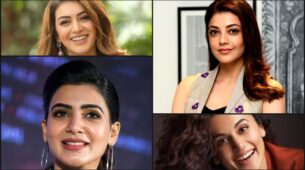 Style Your Birthday Looks With Samantha Akkineni: Have A Look At Some Of The Best Outfits