Who looks most royal in designer outfits between Prabhas, Yash & Vijay The South film industry has been blessed some of the hottest hunks who enjoy a millennial of fan following for themselves all around the world. Gone are those days where the audience of South movies was limited to just the southern part of the country. Today, due to globalisation and expansion of content, South Indian cinema has become a global phenomenon and three men who have played a huge role towards achieving that are Prabhas, Yash & Thalapathy Vijay.

Prabhas, Yash & Vijay were humongous stars already in the South but slowly and steadily, they did wonders at the National level as well. Apart from being fantastic action stars, they are also huge fashion inspirations for several of their fans and when it comes to looking all sexy and royal in designer suits and outfits, there’s no beating this trio.

Also Read: Allu Arjun Vs Mahesh Babu Vs Prabhas: Who is the BEST Dancer of the South Film Industry? 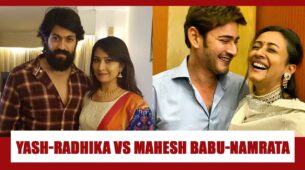