The newbie of Bollywood Sara Ali Khan has won many hearts with her exceptional work in the movie Kedarnath. Her fashion sense is really awesome and gives fashion goals.

She is the daughter of Saif Ali Khan and Amrita Rao. Since this couple is divorced Sara still spends time with her father. After Kedarnath, she gave another hit Simba in the same year. This 23-year-old actress made her mark in the Bollywood in her first movie itself. She is now working with Imtiaz Ali’s movie coming up in 2020. She will be opposite Kartik Aryan. In one of her interview, she said she would like to marry Kartik Aryan and since then the rumours of her dating Kartik hasn’t stopped. 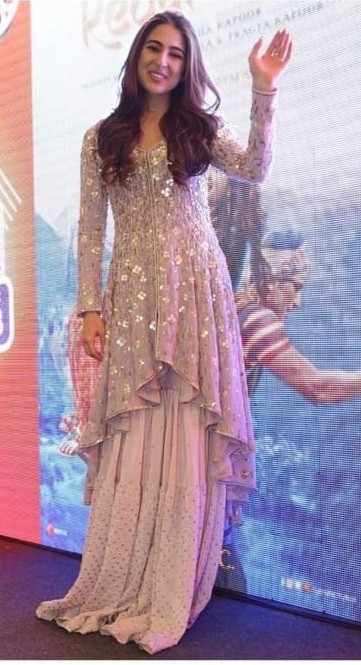 Apart from her acting career, she is also a fashion model. She recently made her debut by walking down the ramp of Falguni at a Manish Malhotra fashion show. Her brother Abrahim Khan and co-star Kartik Aryan was seen cheering her at this event. She was spotted wearing a chess-themed outfit when she stepped out in the city. Many of her award function dresses are way too unique and an attention grabber. Wearing a velvet red two-piece suit for the promotion of Kedarnath she gave us some major ethnic goals. She prefers wearing bright colours like silver of green. One of her outfits was a blue jumpsuit with a printed pattern. She nailed the black lehenga with a black ethnic shrug on top of it. She once wore a typical pathanvi suit which was green in colour with a heavy embroidered and sure turned many heads with it. Except for her clothes she also has a good choice in the accessories she wears. From long earnings to mang tikka and heavy necklace or simple pendant she knows what should be paired with what. Her bracelets and watches are also a match for her outfit. She has a perfect hairdo and also matching footwear with it. And to top it all she carries a designers clutch that is just icing on the top. Well, we must say she has surely got this from her beautiful mom. What Do Sara Ali Khan & Kylie Jenner Have In Common?

Throwback To Stunning Blue Looks Of Sara Ali Khan With Mom Amrita And...

Spring Summer Fall: Sara Ali Khan wants someone special to 'take her b...