The Kabir Singh actor Shahid Kapoor is all suited up to set the stage on fire. As we all know he is happily married to Mira Kapoor who was his father’s friend's daughter. They have two adorable kids Misha and Zain. While Shahid is from the Bollywood industry Mira is all unknown to it. But as seen in many of their Instagram pictures the couple never fails to amuse us with their fashion sense. Nowadays not only the couple but also their kids are all over the internet.

Apart from real life, their chemistry is seen in the photoshoot they recently had for Vogue magazine. They were seen twinning in black and sure gave us some major couple goals. Shahid was seen wearing a white t-shirt on which he wore an embroidered blazer while Mira slayed in the black lehenga on the cover of the magazine. Earlier weeks before the shoot they were seen trying on clothes in a very famous fashion studio in Mumbai. The fans couldn’t handle the cuteness of this couple and their feed was flooded with appreciating comments.

Not only for Vogue but they also worked together for a wedding magazine in which they posed as a newlywed. They twined in this cover too and were seen wearing Anita Dongre designed pastel blue attire. They have worked together for many magazines and they came out to be as the hottest couple of b town. In one of the shoots, Mira was seen wearing a pink two-piece suit and Shahid slayed in a blue blazer. Mira once wore a green lehenga and topped it with some ethnic accessories while Shahid was seen wearing sherwani here too.

While not only their shoots but they also came out to be an outstanding couple in their wedding itself. The theme for their wedding dress was pastel pink and Mira’s lehenga took over every girls mind while on the other hand, Shahid looks the Mr .perfect in his off white kurta paired with a pink turban. In one of the photos of the shoot, they were seen holding the king and queen play card and their faces were blurred in the back. 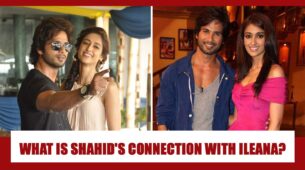