Ranbir Kapoor, heartthrob of the nation for over 12 years now, is also one of the best dressed Bollywood celebs. The title track of Saawariya where Ranbir Kapoor can be seen standing at the French window, wearing nothing but a towel, was probably one of the moments when women collectively wished for some sort of wardrobe malfunction. This is a testament to Ranbir Kapoor’s sex appeal which has been palpable from the minute he’s set foot in the film industry.

His unparalleled sense of style helps for sure. Whether it’s dressing up for promoting his movies or just catching a flight to a holiday destination, the Sanju actor can pull off anything effortlessly. A look at the star’s social media feeds and you’ll find abundant proof to support our claims. It’s probably those Kapoor genes at work.

According to Ranbir Kapoor’s stylists Priyanka Shahani and Kazim Delhiwala, the Ae Dil Hain Mushkil actor prefers a blend of sports luxe and streetwear and has a major love for chunkier kicks. He’s constantly upping his style game and if you were to take our word, he’s winning at it. Whether he’s in a three-piece custom tailored suit, Or wearing sweatpants, velvet and otherwise, 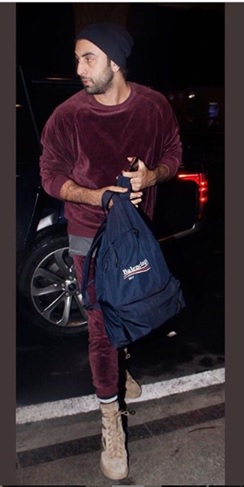 One secret to looking as good as the Kapoor offspring does is sticking to the basics, dressing for the occasion and being comfortable in what you’re wearing. Although, he isn’t afraid of mixing things up and experimenting a bit, as we can see here. While promoting Ae Dil Hain Mushkil, he was dressed in a Turbull and Asser suit and off-white shoes. You can feel the confidence radiating from him. Even when he starred in the Sanju biopic and was required to dress according to the different periods shown in the film, and he managed to pull off every single look!
Although Ranbir Kapoor isn’t active on Instagram or any other social media platforms, his fashion statements, his upcoming movies, and just his existence, in general, make sure that we keep get our dose of this dapper actor.