Who will look best with Suhana Khan between Vicky Kaushal, Ayushmann Khurrana, and Kartik Aaryan The year 2018 saw a much-needed shift in momentum when it comes to Bollywood. 2018 was the first time in the history of Indian cinema where we saw content overpowering stardom. That’s the reason when movies like Zero, Tubelight & Thugs of Hindostan bombed at the box office, movies of youngsters like Vicky Kaushal, Ayushmann Khurrana and Kartik Aaryan did wonders at the ticket counter. And ever since then, there was no looking back for the magical trio. They continued their good work with a spree of hits and eventually, Ayushmann, Vicky and Kartik became three of the most popular modern-day hunks of Bollywood.

Talking about another modern-day sensation, she sets the internet on fire every time she posts a hot picture and what’s amazing is she is yet to even make her debut in Bollywood. Well, brownie points for guessing, the girl is none other than Suhana Khan. With Suhana expected to make her debut in Bollywood soon, it is only a matter of time before opportunity knocks the door for her to get paired with these three. But the question is with whom will Suhana look the best on-screen?

We leave the choice to you. Let us know your views in the comments below and for more updates, stay tuned to IWMBuzz.com.

Also Read: Kartik Aaryan vs Tiger Shroff: Who Has The Perfectly Ripped Body? 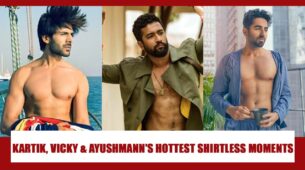