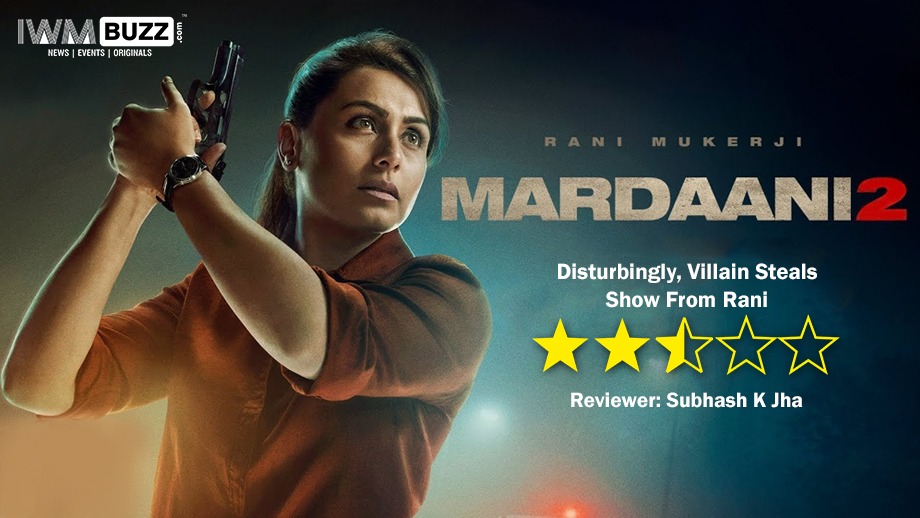 Something deeply disturbing happens in the course of this tactile thriller about an audacious criminal and a determined law enforcer playing a  game of cat-and-mouse to the bloody finish.

Somewhere during the nailbiting narration, the vile villain, so heinous and barbaric in his violence against women that he could be all the gang rapists of the Nirbhaya case rolled into one, begins to seem a far more interesting character than our cop-heroine  Shivani Roy, whom we met five years ago in the first  Mardaani film.

Back then Rani Mukherjee appeared far more fiery and passionate. Maybe it’s just age that has caught up with Shivani. Or worse, maybe she has become bored with all the crime corruption and compromises around her.  But back then she seemed to care much more when a street girl disappeared and was tracked down to a  flesh trader, played with magnetic malevolence by Tahir Raj Bhasin in Mardaani.

The villain in Mardaani 2 is a far more complex and disturbing character. He rapes and kills young girls in the educational hotbed of Kota in  Rajasthan with devastating impunity. What is even more disturbing is that he talks directly to us, vomiting his perverse thoughts about women and why he wants them brutally assaulted and mutilated writhing on the floor begging for his mercy.

He hates women who act equal to men. He is a case-study of gender prejudices.

Yuck to that.  But here’s the thing. The young actor Vishal Jethwa playing this despicable sub-human trash is so very effective, so clued into his character’s twisted mindset that the villain ends up being far powerful than our female hero who looks distracted and a little bored all the time.

Maybe Rani was trying to do something different with her role this time. Except for her final goosebumpy breakdown sequence where her tears roll with the end-credits,  Rani’s Shivani Roy shows no overt emotions.  She would rather go around shouting at undisciplined subordinates at the police station who either look amused and bewildered as they must deal with their Khaki Ki Rani’s choler round the clock.

Sadly Rani’s outbursts are tame. Even when  Shivani is put on television at a most inopportune time to speak on the disempowerment of women—for no other reason except that she is played by the producer’s wife—she looks distracted and uninvolved. This a passionless performance from a  brilliant actress who shook us to our core with her recent rousing performances in Mardaani and  Hichki. The encore leaves Rani cold. Or, so it seems special when the psychotic villain’s part is written with much more care.

Not that  Mardaani 2 is not a watchable film. It is.  The taut and diversion-free screenplay moves at breakneck speed even as the villain’s audaciousness crosses all limits. But somewhere I felt this film was motivated not by its concern for rape victims in our country, but simply to give Rani Mukherjee a chance to beat the male-dominated profession at its own game.

She has terrific support from the cinematographer  Jishnu Bhattacharjee who gives to the crime-enveloped drama the feeling of dazzling drab. I felt Mardaani could have gone a lot further if it had not chosen to be a film that talks to us about a sick society without providing any healing remedies.

Review of A Hidden Life: Terrence Malick’s best work since Tree of Life?