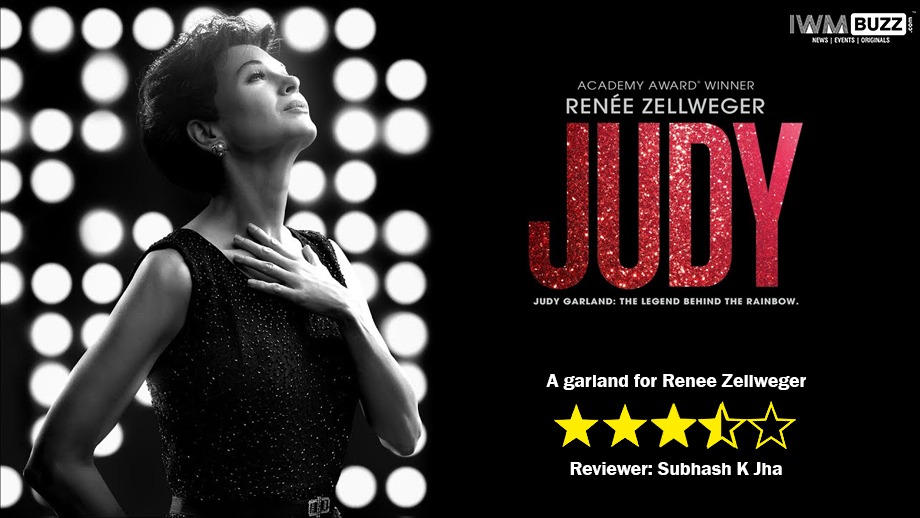 Judy Garland lives again. The legendary live performer and screen bombshell, a beguiling blend of Marilyn Monroe and Shirley Temple, died at her prime in her 40s when the world was at her feet.

The film, scripted with the coiling-uncoiling immediacy of a story that was waiting to be told, captures the final years of Ms Garland’s astounding life, as she sunk into the sinister solace of alcohol and drugs, killing her career and self in one bold stroke.

Straightaway, Judy is a film to cherish and hold close to your heart. It shows the self-destructive streak in a star and the fading away from stardom, with such non-judgemental eyes that we never feel the terrible burden of self-abuse that the protagonist brings to bear on her life and her screen story.

Then there is Renee Zellweger playing…no, sorry reliving Ms Garland’s closing years with a vivacious vividity. The actress transforms into the crumbling legend in front of our eyes. Ms Zellweger has performed Judy Garland’s songs; she is just spellbinding on stage as she stumbles in an alcoholic stupor crooning ‘Over The Rainbow’.

I cannot say I am as happy with the relationships that Garland is shown to cultivate and destroy, as I am with the central performance. The husband (Rufus Sewell) and lover (Finn Wittrock) barely register as individuals. They are imagined from the outside as invasive entities in Garland’s life, destroying her precarious mental equilibrium. They aren’t cads. Just what…well…men are supposed to be when dating a woman too famous to be a lover.

There is more flesh than a flash in Judy Garland’s relationship that grows with a young poised sensible woman in London Rosalyn Wilder (played with marvellous gravitas by Jessie Buckley). Rosalyn is basically hired to ensure that Judy gets on stage during her long stint in London. Some kind of empathy grows between the two women.

In one of the film’s best sequences, Rosalyn orders a big yummy creamy cake for Judy over dinner. Cake, you see, was forbidden to Judy ever since she became a star at 14, even on her birthday. Now that cake staring temptingly at Judy Garland becomes a symbol of everything that stardom denies to the star.

There are many such moments in the film where I found myself looking at the life of the fascinating American icon who lived to be famous and died to be be with her children (Oscar winning Liza Minelli was Ms Garland’s daughter). Mention must be made of newcomer Darci Shaw who plays the young Judy facing constant borderline abuse from legendary producer Louis B Mayer.

Judy is a work of great love and abject loneliness. It portrays the star as a shadow dancer in her own narrative, never knowing which way to go when the rain sets in. It could have been a heartbreaking experience. But the film keeps a tight leash on the emotions. Which is more than can be said about the legend that it recreates in such glorious colours.