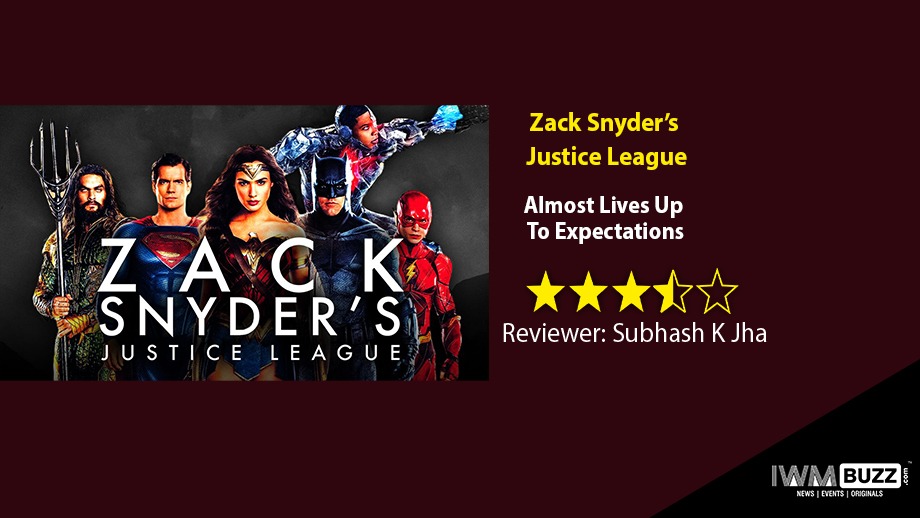 If you are not a fan of the super-hero series(I am not, in how many ways can the world be saved?) then the 4-hour length of this unusual homage to super-heroism may seem like a slog. However director Zack Snyder’s mastery over the magnificent manoeuvres of these masters of the universe is so incredible, and the storytelling so uncluttered and uncramped, that I found myself swept into this world of galactic battles with nary a pause to breathe easy.

This is not to say that the breathless narrative, filled with epic sound and mythic fury is not without its baggy moments. There are many moments in the commodious narrative when I felt the director could have been less self-indulgent more economical in expression.However, such is his command over the resources at his disposal that Sunder ensures we get back into the brisk storytelling at just the right junctures.

To go back a bit in DC history, this film was originally released in 2017 as Justice League , and in a shape not approved by the director. Justice League was severely panned and the director decided to do his own cut. It looks like Synder had it all worked out. The universe of the super-heroes never appeared more inviting and intimidating. Every super-hero is injected sharply into the plot’s arteries. Nothing is in vain. The story is divided into six easy-to-access chapters ,each an individual experience and yet all of them come together to form one simmering scalding universe of collective super-power to save the world from a hideous monster named Darkseid.

This massive achievement does tend to walk on the dark side. But we never feel the weight of the super-hero’s angst , specially that of Superman(Henry Caville) who appears in the last chapter. It is the tenderest most supine chapter where Superman is re-united with his beloved Lois Lane(Amy Adams)and dear mother Martha(Diane Lane).

All the charismatic actors lend their own individual heft to the heavy hero-giri. Wonder Woman Gal Gadot does most of the heavy-lifting in the plot. She is sinewy sexy and salvational . Much more than what she was in her own recent film Wonder Woman 1994. Among her colleagues I also found Ezra Miller very charismatic as The Flash while Ray Fisher as Cyborg will blind you with his tragic backstory. In comparison Ben Affleck’s Batman and Jason Momoa as Aquaman came across as dull, too distanced from the apocalyptic events to be eligible for saving the world.

What saves the cataclysmic world of Zack Snyder from falling apart is its constant evocation of warm memories from the past which support and boost the urgency in the present.Zack Snyder’s Justice League is an experience of considerable power and some joy. Is it worth investing four hours of your life in? Yes, yes, a big yes.