Actress Yami Gautam has been accused of insulting Assamese culture. Read the story for more details to know what she said. Quite often, actors end up being at the receiving end of public flak for no reason. This time, it was the turn of Kaabil actress Yami Gautam who has been accused of disrespecting Assamese culture.

Yami went to Assam to inaugurate the Great Guwahati Marathon on March 1, 2020. At the airport, a male fan tried to get close to her by trying to put a ‘Gamosa’ around her neck without her permission. The Gamosa is a traditional outfit of the Assamese. Not expecting this move, Yami moved back and her team moved the fan away. This led down to criticism against Yami that she disrespected the traditional Assamese culture. Clarifying her stand on the same, Yami wrote –

My reaction was simply self defense. As a woman,if I am uncomfortable with anyone getting too close to me, I or any other girl has every right to express it. I Dint’ intend to hurt anyone’s sentiments but it’s very important to voice out a behavior, inappropriate in any manner https://t.co/sUc4GPxfWv

Well, truly another instance of an incident blown out of proportion. For more updates, stay tuned to IWMBuzz.com. Samantha Akkineni, Kareena Kapoor and Yami Gautam Teach Us How To Style Stripes! 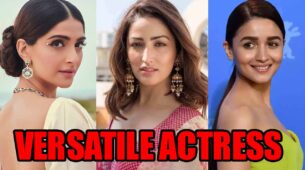 Sonam Kapoor VS Yami Gautam VS Alia Bhatt: Who's the most versatile actress?