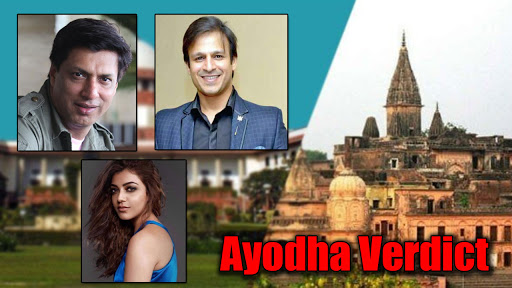 The Ayodhya verdict has been a matter of concern and debate for literally several years..Over many years, there has been a dispute over the land between the Hindus and Muslims. Be it Ram Mandir or Masjid, heated arguments have resulted in several riots over the years resulting in bloodshed and killings. Finally, the Supreme Court today has come up with a Verdict which is favouring both Hindus and Muslims. Bollywood too shared their views on the much-anticipated verdict. Take a look –

Welcome the fair verdict over the #AyodhyaCase by Hon. Supreme Court. Finally the long pending issue will be resolved now. 🙏

No one could have said it better than the great father of our nation!

This is a time for peace and healing. Let’s be sensitive to each other and build a more inclusive and unified India 🇮🇳 #AYODHYAVERDICT

While accepting the #supremeCourt Verdict I so wish the the honourable court had allowed 5 acres EACH to the parties for a temple & mosque somewhere else & made this site like the Vivekananda Rock in Kerala a space to celebrate religious harmony. BUT. Anyway to let peace prevail.

#AYODHYAVERDICT hail Supreme Court! Let the needful be done. Now moving towards working on issues that will help our nation become the BEST place to LIVE in.

My dear Indians, please respect the Supreme Court verdict on #AyodhyaCase today. We all need to heal together and move on from this as one nation !! 🇮🇳

No better words possible for this landmark day. Much has already been lost in the name of God…no deity nor community desires any of that. May respect and harmony win biggest. #AyodhaVerdict https://t.co/hfhkJm5Jwy

IN PHOTOS: Sara Ali Khan looks like an angel

This is what Deepika Padukone wants everyone to watch now, details inside