Salman Khan the birthday boy had his party this time around in Mumbai and not in his farmhouse Panvel. Read on. Every year for his birthday on December 27, Salman Khan and his friends drove to his father’s farmhouse in Panvel for celebrations that lasted till the New Year.

This year Salman’s birthday was celebrated at his family apartment  in Bandra, Mumbai.

A close friend reveals why.

The decision to shift  the venue of his birthday to his home was taken in deference to his parents’ health.

The turnout at the midnight party was understandably high, as those who usually stayed away for the distance turned up in huge numbers. Salman’s Dabangg heroine Sonakshi was one of the first to arrive with her mother and brother, followed by Katrina Kaif who was accompanied by director Ali Abbas Zafar. Saiee Manjrekar who made her debut in Dabangg 3 arrived soon after.

Kabir Khan who directed Salman’s Ek Tha Tiger, Bajrangi Bhaijaan and Tubelight was nowhere to be seen. Nor did one see former groupies like Sooraj Pancholi and Himesh Reshammiya at the bash, lending credence to rumours that these are the latest unfortunate souls to have fallen out with Bhaijaan. On the other hand, Pulkit Samrat who had been blacklisted after he divorced Salman’s rakhi sister, was seen happily posing with his new girlfriend Kriti Kharbanda.

Bhaijaan, birthday boy Salman was in a good mood in spite of the unsatisfactory collections of  Dabangg 3. He happily posed for the paparazzi, first solo then with co-star Sonakshi. Salman even cut a cake in front of the paps who were the fed the birthday treat while Salman went inside his home to party the night away. 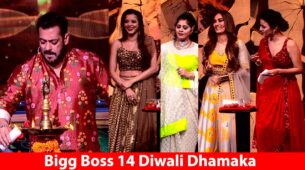