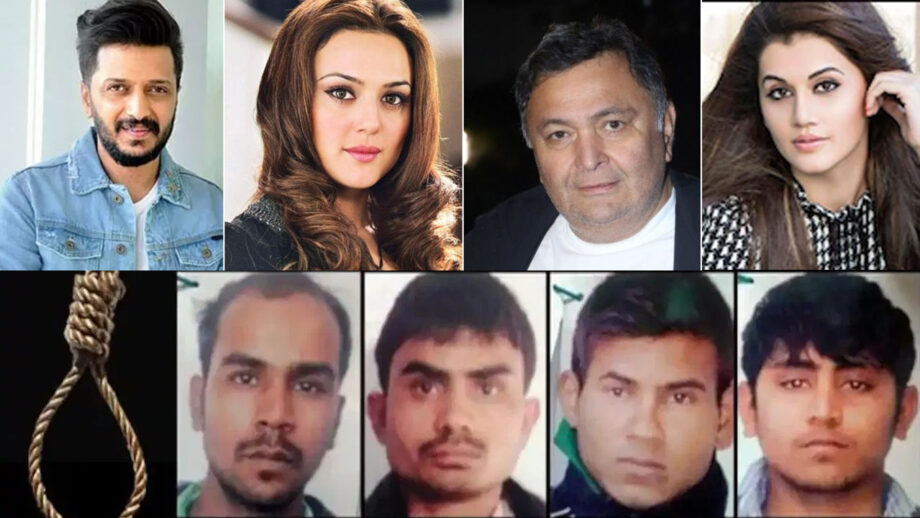 The four men Akshay Kumar Singh, Pawan Gupta, Vinay Sharma and Mukesh Singh convicted in the 2012 Nirbhaya gang-rape and murder case were at 5:30 am on Friday at Tihar Jail in Delhi.

Bollywood celebrities like Riteish Deshmukh, Taapsee Pannu, Shraddha Kapoor, Preity Zinta and others took to their social media to hail the decision of the government and also dedicated the day to all the strong women.

Nirbhaya Justice. “Jaisi karni waisi bharni” Let this set an example not only in India but world over. Punishment for rape is by death. You have to respect womanhood. Shame on the people who delayed the execution. Jai Hind! pic.twitter.com/ENyjTxwlMI

#JusticeForNirbhaya My thoughts and prayers are with the parents, friends & loved ones of Nirbhaya. The wait has been long but the justice has been served.

Finally justice has been served for #Nirbhaya, I pray for the much needed mental peace for her parents now. 🙏 #JusticeForNirbhaya #nirbhayagetsjustice pic.twitter.com/MVQARRDHWE

It’s done. Finally. I hope the parents can finally sleep slightly better tonight after YEARS. It’s been a long long battle for them. Asha Devi 🙏🏼 https://t.co/XidMPTzKm4

If #Nirbhaya rapists were hung in 2012 the judicial system would have stopped so much crime against women. Fear of the law would have kept the lawless in check. Prevention is always better than cure. It’s time the Indian govt. takes steps for judicial reforms. #RIPNirbhaya🙏