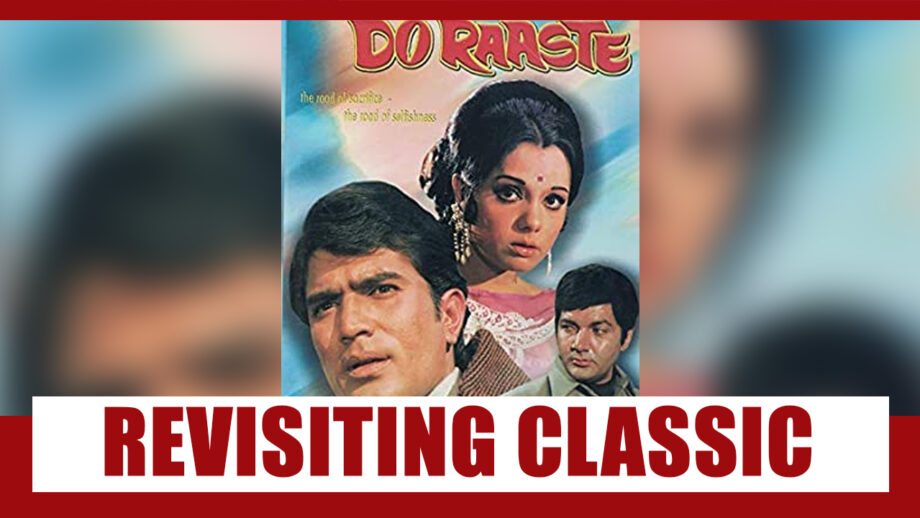 Raj Khosla, whose 29th death anniversary is on June 9, was unarguably one of the most underrated filmmakers of our country. The sheer variety displayed in his films, his vast range of themes and genres, and his astounding command over the language of cinema was so unique and distinctive that one could recognize his stamp even if the director’s name was missing from the credits.

Abundantly prolific Khosla’s career could be segregated into sharply polarized genres. He directed some noire-ish suspense thrillers CID, Kala Pani, Solva Saal in the beginning of his directorial career.

Then he did his trio of whodunits Woh Kaun Thi, Mera Saaya and Anita, all featuring Sadhana as the mysterious woman in white restlessly roaming the night singing Lata Mangeshkar’s haunting melodies. The germs of Raj Khosla’s later concerns about the Other Woman were sown in these wandering souls whose songs of nomadic lament Naina barse rimjhim, Lag ja gale se, Tu jahan jahan chalega and Qareeb aa yeh nazar phir mile na miley epitomized the eternal search for love.

It’s interesting to see Khosla hop genres which were completely antithetical to one another. If he liked the suspense thriller and the whodunit he also loved the dacoit drama and made his career’s second-most successful film Mera Gaon Mera Desh within the borders of banditry. Subsequently, he returned to the dacoit drama with another fine but underrated film Kachche Dhaage which curiously didn’t do well.

By the time it came along a decline had set into Khosla’s career.

Khosla took a grip over himself just one more time to come up with another golden-jubilee hit Main Tulsi Tere Aangan Ki in 1978. The film carried forward a theme that fascinated Khosla in the later part of his career. A man caught between the love of two utterly devoted women. This theme recurred with passionate persistence in Raj Khosla’s later works Sunny(where Sharmila Tagore and Waheeda Reman were the two women in Dharmendra’s life), Daasi(where Rekha and Moushumi Chatterjee “shared” Sanjeev Kumar) and Main Tulsi Tere Aangan Ki where Vijay Anand’s mistress (Asha Parekh)died leaving her child to the care of her soutan the wife Nutan.

It is said that the theme of two women sharing one man had its origins in Khosla’s own life.

Do Raaste released in 1969 was the biggest hit of Raj Khosla’s illustrious career. The germs of the Man, Woman & Mistress theme that occupied centre-stage towards the end of Khosla’s career were to be traced back to this utterly transparent and moving family drama about a man given the responsibility of looking after his step-siblings after his father takes a dying vachan from his eldest born that he would look after his stepmother and her children like his own.

Based on Marathi litterateur Chandrakant Kakodkar’s celebrated novel Nilambari the film detailed the struggle of Nabendu (Balraj Sahni) to keep the family together when it begins to disintegrate after Nabendu’s foreign-returned stepbrother (Prem Chopra) marries the girl of his choice.

Significantly the novel was named after the shrewish home-breaker Nilambari. In Do Raaste the character that holds the plot together ironically destroys the family unit. Bindu who went on to make the hottest negative jodi with Prem Chopra in a series of films was here in her element, hamming to the hilt, as Balraj Sahni underplayed his character’s anguished and silent acceptance of his stepbrother’s inappropriate choice for a wife.

Sahni’s signature song in Do Raaste is K L Saigal’s Ek bungla bane nyara.The film’s producers acquired the immortal Saigal song’s right to use it as a theme structuring the destruction of the joint-family by an outsider, here the archetypal Evil Bahu who first seduces the son (we see Prem Chopra openly and enthusiastically lusting for his new wife after the family dinner) and then cajoling him away from his father-like Bade Bhaiyya and the family.

Specially poignant is the matriarch Veena’s helplessness. In her death scene she mistakes her laadla stepson Nabendu for her youngest son Satyen(Rajesh Khanna) and tells him, “Your elder brother has spent his entire life looking after the family. It’s time for you to look after him.Promise me you will.”

The poignancy of the situation where the patriarchal brother hears his stepmother tells him that he needs to be looked after is to this day immensely moving, more so now than way back in 1969 when families lived and suffered together.Do Raaste is all about loving one’s family long before Karan Johar discovered this route to boxoffice nirvana.

Raj Khosla’s platinum-jubilee hit is a wrinkle-free family drama. It spawned numerous parivarik melodramas in the 1970s by director ranging from Mohan Kumar to Kalpataru who conceived sagas about the blissful joint family coming apart as the bitchy Bahu steps into the blissful family portrait.

Raj Khosla loved to experiment with characters and actors. He would often cast big names against their image. The romantic Rajesh Khanna who was on the threshold of a kind of superstardom never seen before or after, was here cast as Satyen a very angry young man who took on his shrewish sister-in-law and her henpecked husband( his elder other) headlong. Some of the film’s most interesting scenes are in the family living room where Satyen, young, hotheaded, stubborn and stubbled ticks Neela off in front of the family and her high-society friends. Khanna got his applause even when he was not the central character.

What doesn’t work that well is the romance between Rajesh Khanna and Mumtaz who coincidentally plays Bindu’s younger sister. Khosla compensated Mumtaz with one of Lata Mangeshkar’s career’s biggest hits Bindiya chamkegi which, though not relevant to the plot, became the film’s biggest USP.

Says Lata Mangeshkar, “I heard people kept returning too see the song. Raj Khoslaji was a master at song picturization. None of us thought it would turn out so big. But we knew the director was going to shoot it in a very special way.”

Though the film’s blockbuster music is credited to Laxmikant-Pyarelal, the Bindiya chamkegi track is supposed to be the brainchild of Khosla and lyricist Anand Bakshi.

Mumtaz was lucky to get songs like Bindiya chamkegi and Chup gaye saare nazaare. Khosla loved to give prominence to negative female lead, a.k.a the vamp. In Mera Gaon Mera Desh Laxmi Chhaya who played the villain’s moll bagged all the chartbusters like Maar diya jaye, Aaya aaya atariya pe and Hai sharmaaon while the film’s leading lady Asha Parekh was apportioned only 1 ½ songs.In Kachche Dhaage the vamp Sona(a Madhubala lookalike on whom Milan Luthria modelled Kangna Ranaut’s character in Once Upon ATime In Mumbaai) cornered a strong role and a Lata Mangeshkar solo.Bindu in Do Raaste got no songs. But she got a role that defined the rest of her career.

Though Do Raaste belongs to Balraj Sahni, Bindu’s Neela dominates the female characters. There are some other finely-etched women in he film. Veena as the mother and Kamini Kaushal as Balraj Sahni’s devoted and supportive wife strike the right notes.Even Leela Mishra as Bindu’s scheming mother is vividly etched. But Bindu’s domineering Bahu act gives the drama that zing and flavour which make the other extra-sweet characters appear human after all.

That fine actor Jayant(Amjad Khan’s father) does a fine turn as Balraj Sahni’s devoted Muslim friend. He is a stereotypical goodhearted boisterous Pathan. But never over-the-top. Never over-done. Every character has a life beyond the written word. Raj Khosla hated cardboard characters. In Do Raaste he makes sure that the family that stays together doesn’t get lost in the say-cheese studio portrait.

What stays alive is the sound of Saigal’s Ek bungla bane nyara, as Balraj Sahni looking every bit the concerned worried tired but undefeated patriarch tries to protect the family from disintegration. Today, when the joint-family system is all but dead, Balraj Sahni’s valiant fight to keep the home from breaking up seems even more praise worthy.

Do Raaste is to this day Raj Khosla’s best-known work. Sunita Khosla Bhalla the second of Raj Khosla’s 5 daughters, is trying to keep the Khosla ka ghosla intact. She informs that she’s writing a book on her father. I tried to contact Bindu. But she insisted I speak to her husband!!

Rajesh Khanna sported an off-and-on stubble, since he was simultaneously shooting for B R Chopra’s Ittefaq which required him to sport a beard. Raj Khosla had to write in a dialogue about Khanna’s character saying, ‘He’s so temperamental he shaves at will.’
Bindu became a buddy of Rajesh Khanna.She played the bad woman in any number of subsequent Khanna starrers right up to Amar Deep where she played his mistress .
Mumtaz-Rajesh Khanna went on to become one of the hottest most saleable star pairs of all times.Raj Khosla cast them together again in Prem Kahani . But in spite of Laxmikant-Pyarelal’s outstanding music Prem Kahani bombed
The scenes between Balraj Sahni and Veena were taken from Raj Khosla’s own relationship with his mother.
Mehmood Jr’s Lata Mangeshkar-sung track Apni apni biwi pe sabko guroor hai inspired Amitabh Bachchan’s Mere angnein mein.In Do Raaste Johnny Walker made a guest appearance alongside Mehmood Jr in the song.
Raj Khosla’s Main Tulsi Tere Aangan Ki was also from a novel by Chandrakant Kakodkar.