The current drug scandal that rocks the film industry will claim many casualties. While it is too early yet to know how the careers of those being summoned for question for substance abuse would be affected, producers are already moving the pieces on the chess board.

“She was the top contender for the fourth instalment of the Baaghi franchise.But now with her name in the drug scandal we don’t know what’s going to happen. Tiger Shoff has a spotless reputation.Producer Nadiadwala has zero tolerance for scandals. He dropped director Sajid Khan and actor Nana Patekar from Housefull 4 when they were named for sexual harassment.If Shradha’s name sticks to the drug scandal she will be out of Baaghi4,” informs a source close to the Baaghi franchise.

Incidentally Tiger Shroff is a childhood friend of Shradmdha. Ever since he heard her name crop up in the drug scandal he has gone into a shell. 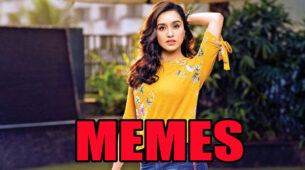 Alia Bhatt Vs Kajal Aggarwal Vs Shraddha Kapoor: Who Could Be Your Lifetime Crush?