No one does it quite like Sanjay Leela Bhansali (SLB). His cinema weaves passionate dreams into the operatic language, creating a world so beautiful you wish it really existed. In an industry where filmmakers think flying cars and smashing chorus dancers are the acme of aesthetics here is that rare creative genius in the tradition of V Shantaram, Raj Kapoor, Mehboob Khan and Bimal Roy who toils over the frame and every costume of his incandescent heroine as if his life depended on it.

1. Khamoshi: THE Musical(1996): Some say SLB’s first film about the beautiful vulnerable Annie(Manisha Koirala) trying to cope with the possessive demands of her deaf and mute parents(Nana Patekar, Seema Biswas) is still his most honest work. The truth is Khamoshi fell prey to dishonesty when the original tragic ending of Annie’s death had to be changed on distributors’ demand. The dark passionate redemptive tale was rejected on the day it was released. Rejection reminds us of Madhuri Dixit and Kajol…they both turned down the lead. Manisha immortalized herself with her porcelain looks and delicately nuanced performance. True to character, Nana’s huge altercations with the director over the role’s interpretation. Salman sportingly slipped into a supporting role, just to give his friend a boost up in his directorial debut.

2. Hum…Dil De Chuke Sanam(1999): Some say, this is SLB’s tenderest work to date. There is certainly magic at work here, magic that emanates from the elegant romance between Aishwarya Rai and Salman Khan set in the spicy aromatic bustle of a large upper-class Gujarati household. The fact that the pair actually fell in love helped add passion to the pristine relationship between ‘Nandini’ Aishwarya and ‘Sameer’ Salman. Ajay Devgn was surprisingly effective as Nandini’s husband who takes upon himself the task of re-uniting his wife with her lover. The idea of such illimitable nobility was inspired by Mani Ratnam’s Moun Ragam. Salman was keen that his character ‘gets’ Aishwarya at the end. He even sought Sooraj Barjatya’s help to convince SLB.

3. Devdas (2002): 13 years ago made at a staggering budget of Rs 60 crores (which is today’s equivalent of Rs 200 crores) SLB’s version of the classic Saratchandra saga of love loyalty betrayal and redemption was a giddying opera of exacerbated emotions and heightened drama. The stunning visuals, the opulent sets, and the mystical magical song and dance sequences made this version of Devdas a masterclass on ‘The Bollywood Dream’. Many found the film’s excessive emphasis on opulence to be overpowering. But to this day, Devdas remains SLB’s most patent work.

4. Black (2005): Many think Black to be the minimalist counterpoint to the extravagance of SLB’s previous work Devdas. Nothing could be further from the truth. Though the film was outwardly the stark story of the relationship between a physically disabled/specially-abled girl and her teacher, underneath the political correctness of the theme the film screamed with epic ecstasy in every frame. With extraordinary central performances by Rani Mukherjee and Amitabh Bachchan Black was a stunning ode to the spirit of resilience and tenacity, done in flamboyant shades. Even the snowflakes were measured in their beauty.

5. Saawariya (2007): Intended as a play-on-film this exceptionally unorthodox experiment with form prompted boos galore from critics and the audience. Saawariya is SLB’s most misunderstood film to date. It creates a self-contained world of fantasy landscape and wispy love, held together by the most spectacular debut seen in the last 15 years. Ranbir Kapoor as Raj, the waif with a heart of gold and feet like Fred Astaire, was a prized discovery. The film needs a second less excitable reading. Go beyond the blue veneer and discover the multi-hued heart.

6. Guzaarish (2010): SLB’s third and last film about the desperate longings of the physically disabled, this one starred Hrithik Roshan in a stellar, if somewhat all-knowing performance as the paraplegic who would rather die than remain progressively dependent on his beautiful nurse, played by Aishwarya Rai. There was much to be admired about the way the director cut his scenes to bring out the fugitive anxieties of a protagonist on the brink. But somehow this remains SLB’s most unfinished work.

7. Goliyon Ki Raaslila Ram Leela(2013): A raunchy Gujju Romeo & Juliet with Ranveer Singh and Deepika Padukone sexing up their on-screen chemistry with loads of innuendo and bawdy backchat. Deepika has recently said that there is a raunchy side to her director. She’s right. SLB gave free rein to that side of his personality, bringing a rambunctious irreverence into the reckless romance between a pair separated by ancestral animosity.

8. Bajirao Mastani(2015): The director is in full form. A grand royal epic about two extremely volatile warriors from enemy territory in love, Ranveer Singh and Deepika Padukone bring to the epic saga a kind of hate-to-love-you compelling conflict that we last saw in K Asif’s Mughal-e-Azam. Tonally tempestuous and yet eschewing the operatic extravagance of Devdas, Bajirao Mastani shows its director at the peak of his powers. What next, Mr Bhansali? 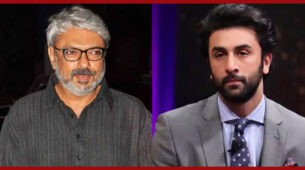