Have a look at these two beauties and their wonderful denim collection! Jennifer Anniston is well known since the 90s, for her role as Rachel Green in the famous American TV show, F.R.I.E.N.D.S. (1994 – 2004). She is currently 51, isn’t it unbelievable? The actress looks so gorgeous even today. She is one of the ageless actresses of Hollywood. The beauty still has the ability to nail a red carpet show with her looks. But, she looks great even in pieces of denim too. She has always preferred denim as casuals.

On the other hand, Jennifer Lawrence, the 29 years old American actress is no less than anyone else. The pretty lady has appeared in various TV series and movies and received a lot of love from her fans. But even she has also made every jaw dropped with her beauty. She looks great in the denim attires. She is mostly seen walking down the streets in them.

Have a look at these pictures! 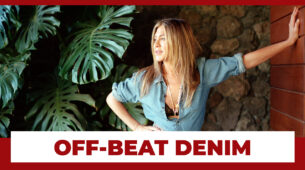