Shamshera is an upcoming Bollywood movie, which is directed by Karan Malhotra and produced by Aditya Chopra’s Yash Raj Films. It features Ranbir Kapoor, Sanjay Dutt, and Vaani Kapoor. Ranbir Kapoor is playing the lead role of Shamshera. He is also playing a double role as Shamshera and his father. Vaani Kapoor is playing the role of Aadarshini, who is Shamshera’s love interest. It is an action-adventure movie.

The story of the movie is set in the 1800s, and this film is about a dacoit tribe who takes charge in the fight for their rights and independence against the British. The word dacoits mean a group of people who are involved in criminal activity such as robbery.

This film is coming to the theatres on 31 July 2020. Sanjay Dutt is playing the role of the main villain of the film. A massive fort was built at Film City, Goregaon, requiring two months of preparation and the effort of nearly 300 workers.

For the first time, Ranbir will be seen playing a double role in his career. All the fans are excited to see the trailer of this movie and to also see Sanjay Dutt and Ranbir Kapoor together.

Check out some amazing pictures of upcoming movie Shamshera, and stay tuned to IWMbuzz.com 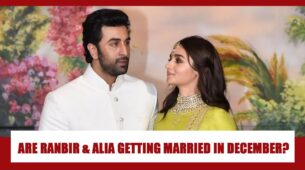