Kartik Aaryan is a modern-day heartthrob and sensation whom the entire country loves and admires immensely.Kartik has had a tremendous turnaround in his career since the success of Sonu Ki Titu Ki Sweety in 2018 and since then, he’s been absolutely unstoppable. A spree of hits in his career in the fom of Luka Chuppi, Pati Patni Aur Woh and Love Aaj Kal has established him as one of the most popular and bankable stars of the young generation.

Apart from being an acting enthusiast who knows how to kill and slay big time in his work, Kartik is also an avid bike fanatic who mostly prefers to ride his special limited edition Royal Enfield in the busy lanes of Mumbai instead of his expensive and luxurious four wheeler vehicle. So today, we show you some adorable moments of Kartik when he has been caught by the paps enjoying a nice bike riding session thereby giving some serious goals to the youth. He loves his wheels. Take a look at the pictures below – 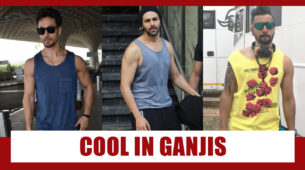