Deepika Padukone is slaying in black. Read the story to find out Giving us all the right fashion inspiration with her classy and chic sartorial pick, Deepika Padukone totally shone brightly in an all-black pantsuit. The global icon is currently in Davos, Switzerland for World Economic Forum 2020. The actress yesterday was honored with Crystal Award for her contribution towards mental health awareness.

After swooning us with a sculpted blue number during the awards ceremony, Deepika chose a three-piece pantsuit for her next appearance. Her head-to-toe black look was wearing a blazer, straight-legged pants and a winter coat. The actress accessorized the look with statement cut-diamond set and bold makeup to go with it.

With a backdrop of the snow-clad mountains of Switzerland, Deepika sure looks like a vision to behold. More so, the actress has received wide appreciation from all across for her promising performance in Chhapaak. Awarded the prestigious Annual Crystal Award, Deepika is truly a global icon who is creating the right noise.

On the work front, the actress was last seen in ‘Chhapaak’, a film based on the life of the acid attack survivor Laxmi Agarwal. The actress played the role of Malti in the film which also starred Vikrant Massey in a pivotal role. Helmed by Meghna Gulzar, the film was released on January 10.

Deepika will next feature in Kabir Khan’s sports drama 83 where she will be essaying the role of former cricketer Kapil Dev’s wife Romi Dev while Ranveer Singh will be seen as Kapil. 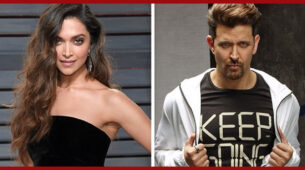 It Was High Time: Hrithik Roshan-Deepika Padukone Finally Together Deepika Padukone makes a big REVELATION on her relationships Big News: Deepika Padukone and Hrithik Roshan all set to celebrate something special together