Take a look at the belted dress of Sanjana Sanghi

The young and new face of Bollywood, Sanjana Sanghi is a brilliant actress. The actress made her debut with Dil Bechara in 2020. She began her career as a child artist and has also starred in films in 2017 by playing supporting roles. The actress just rocks and is working hard to become more successful and achieve immense love for her fabulous performances.

Sanjana Sanghi is spotted wearing wonderfully designed outfits and she looks pretty. The actress is seen wearing belted outfits and looks superb. Her breathtaking looks are just fab. She is a spectacular actress who is not leaving any chance to entertain her fans with her remarkable looks.

The actress wore a black off-shoulder sheer gown with a white belt on it and was looking magnificent in that outfit. She wore that outfit for an award function and was looking beautiful. She made her look perfect by wearing heavy eye makeup and was dazzling her superb makeup looks. The outfit gave her a Royal sassy look. She styled her hairstyle by tying a high ponytail on it. The actress nailed the outfit with her ravishing looks. The outfit is perfect for any event and the black outfit gives a charming look. All actresses look sassy in black outfits and Sanjana Sanghi was sparkling in her black belted outfit. She just drooled the industry with her hottest divine looks. The outfit is the most loved outfit by several people out there.

Check out the belted outfits of Sanjana Sanghi and stay in space with IWMBuzz.com. 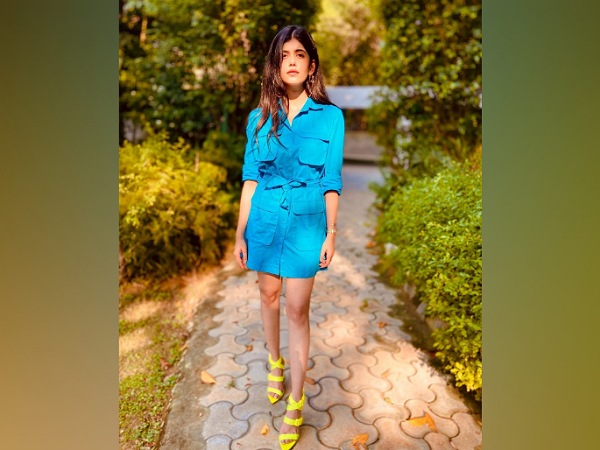 WOW: Did You Know Which Bollywood Actor Gave Tiger Shroff Fitness Tips for A Healthy Body? You Will Be Surprised

Marathi Actors Who Rule The Hearts Of People By Their Humour: From Sid...

When Alia Bhatt And Janhvi Kapoor Dressed Alike: Who Do You Think Rock...