Arjun Kapoor, Tiger Shroff and Siddharth Anand have a fun conversation in the comments section ~ 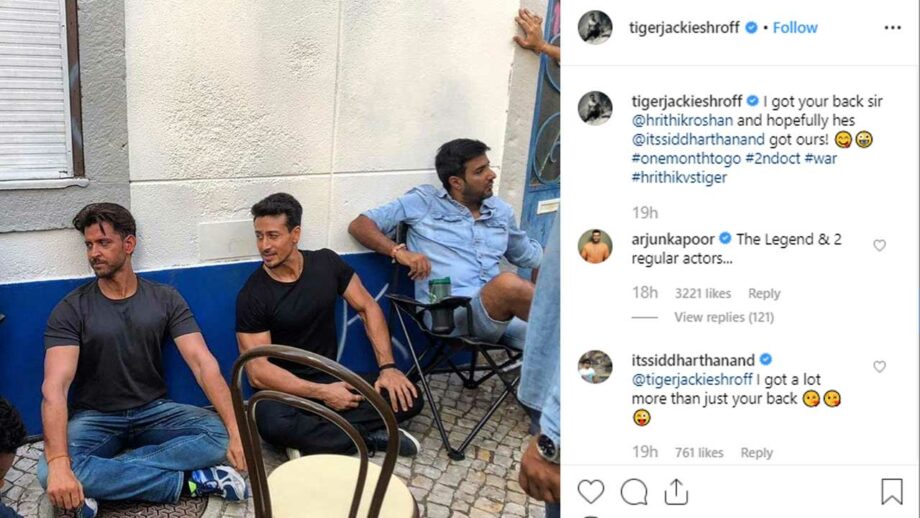 When fans first heard that hunky heartthrobs Hrithik Roshan and Tiger Shroff are coming together for the first time in an action thriller titled ‘War’, they went wild with anticipation. After all, both Hrithik and Tiger have a diehard fan following among action and dance aficionados.

The trailer shows off the nifty moves of Hrithik Roshan and Tiger Shroff to perfection, leaving fans salivating in anticipation of the high-octane action fest that awaits them upon the film’s release.

Tiger Shroff shared a behind the scene picture, featuring himself along with Hrithik Roshan and Siddharth Anand on his Instagram.

Arjun wrote a funny comment as a response, to which Siddharth Anand replied in a funny way too.

Arjun Kapoor, along with Tiger and Siddharth Anand, had a fun banter in the comments section of the photo.

Fans are really excited and awaiting the release of ‘WAR’.

Below is the picture shared by Tiger. Have a look at the comments section, at the fun banter that these actors had on social media.

OMG: Arjun Kapoor gets INJURED while shooting for his next

All you need to know about Arjun Kapoor-Malaika Arora relationship

The Bollywood Action Movies You Cannot Miss In 2019